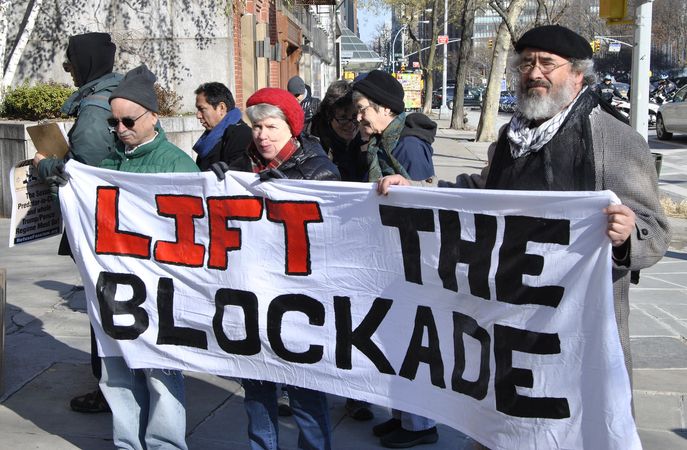 If Yemen is shut off from the outside world again, this would have to be seen as an attempt to use hunger as a weapon of war – a crime against humanity. Foto: Felton Davis via Flickr

On Tuesday, the Society for Threatened Peoples (STP) sent an appeal to the European Commission, demanding an end to the blockade of Yemen by Saudi Arabia. “It would be a man-made disaster if Saudi Arabia were to let the half-heartedly eased blockade of the neighboring country expire on January 19, as announced,” the STP wrote in its letter. “The speculations about a possible end to the eased blockade have already led to soaring food prices – and even the few people who were able to benefit from the temporary easing will be facing existential problems again.”

Kamal Sido, the STP’s Middle East Correspondent, is in constant contact with several people in Yemen. They reported that the civilian population was hardly able to benefit from the short-term easing of the blockade, especially in northern Yemen – and they emphasized that the needy should not be deprived of their last hope. Instead, the inhumane blockade should be lifted permanently. The north of Yemen is controlled by Houthi rebels.

The coalition led by Saudi Arabia had eased the blockade a while ago, but only for a period of 30 days. The deadline will expire on January 19. “If the airports, harbors, and border crossings are closed again, food and fuel will become much more expensive,” Sido warned. “And if Yemen is shut off from the outside world again, this would have to be seen as an attempt to use hunger as a weapon of war – a crime against humanity.”

According to the UN Verification and Inspection Mechanism for Yemen (UNVIM), only about 1.69 million tons of fuel were brought into the country via the Red Sea ports Hodeida and Ras Isa in 2017 – only about one third of the required amount. Apart from that, there are the ongoing “bureaucratic” practices of the Saudis and the Iran-backed Houthi rebels, due to which it is extremely difficult to import vital goods to Yemen. The consequences are extreme food shortages, soaring prices, and hunger.

Since the beginning of Saudi Arabia’s military intervention in the neighboring country at the end of March 2015, at least 10,000 people have been killed and tens of thousands were injured. More than 2,000 schools were destroyed or severely damaged. About 21.2 million of the 26 million Yemenis, nearly 85 percent of the population, are dependent on humanitarian aid. About 7.6 million, including three million children and women, are suffering from malnutrition. Also, epidemics such as cholera have already broken out. At least three million Yemenis are on the run in the country, and 173,000 have already left the country.