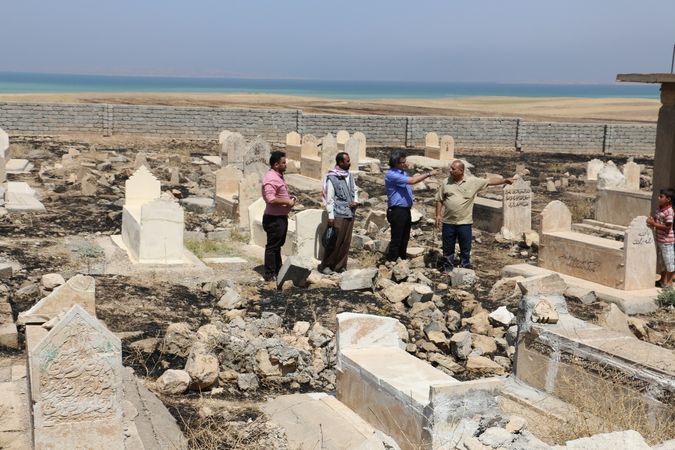 On the occasion of the fifth anniversary of the genocide crimes against the Yazidis of northern Iraq (August 3, 2014) the Society for Threatened Peoples (STP) published a study on the situation of Yazidi women. The publication "Fünf Jahre nach dem Völkermord an Yeziden: Eine Bestandsaufnahme und Handlungsempfehlungen" ("Five years after the Genocide of Yezidis: An Inventory and Recommendations for Action") was written by the German-Yazidi psychologist Prof. Dr. Jan Ilhan Kizilhan, commissioned by the human rights organization. He documents the traumas of the genocide crimes, discusses possible attempts at psychosocial healing in Germany and Iraqi Kurdistan, and outlines political solutions.

"The Yazidis and other minorities are leaving their homes if they are not protected and feel that they are unable to exercise their religious belief and live their way of due to IS terror and the political, religious, and ethnic conflicts in Iraq," Kizilhan wrote. He has been ion close contact with the STP for several years. In the diaspora, however, there is no guarantee that these people can preserve their culture and language. If the members of a people like the Yazidis live scattered throughout the world, their culture might be extinct in four to five generations.

"That is why the STP has been calling for better protection and more support for the Yazidis and other minorities in Iraq for years," explained Kamal Sido, the STP's Middle East Consultant. "The international community will have to mediate in the dispute between the government in Baghdad and Iraqi Kurdistan regarding the Yazidi region of Sinjar," Sido stated. Around 280,000 Yazidis are still living as displaced persons in provisional camps or with private hosts. There will only be a future for them and their children if they can return to Sinjar safely. "Arab Iraq and Kurdistan must finally decide to which country the Sinjar region should belong. It is the duty of the international community to help the genocide survivors and to support this process," the human rights activist emphasized.

Next Saturday, the Yazidi people and their supporters will commemorate the victims of the genocide in Sinjar. On August 3, 2014, the 400,000 Yazidis of the Sinjar region had been attacked by IS terrorist militias. Thousands were killed or abducted. The women were raped, forcibly married, or sold on slave markets. On the occasion of the fifth anniversary, there will be numerous commemorative events in Germany, Europe, North America, Russia, Armenia, Georgia, and especially in Iraqi Kurdistan.

Prof. Dr. Dr. Jan Ilhan Kizilhan was born in Turkish Kurdistan in 1966. He is Head of the Institute for Transcultural Health Research at DHBW Villingen-Schwenningen. Since 2015, he has been medical-psychological director of Baden-Württemberg's special contingent for particularly vulnerable women and children. The study documents their martyrdom in the hands of the "Islamic State".

The study can be read here (currently only available in German).