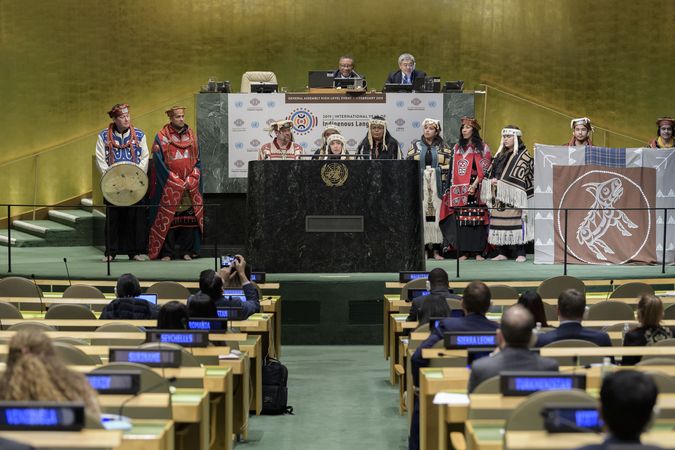 About 4,000 of the world's 7,000 languages are indigenous languages. Most of them are to be seen as threatened. The human right to language is an important factor of collective and cultural identity, as these languages represent the knowledge systems of entire cultures. If languages are lost, the traditions and the collective identity of entire nations are in danger. Picture: Manuel Elias via UN Photos

The United Nations declared 2019 to be the International Year of the Indigenous Languages – and the Society for Threatened Peoples (STP) will now publish a study on indigenous languages (German title: "Sprache: Ein Menschenrecht – Wie Indigene ihre bedrohten Sprachen verteidigen"). The report focuses on the aspect of indigenous language rights under international law and illustrates the difficulties of converting legal protection into actual conservation. It will be handed over to the Federal Chancellery as part of a human rights campaign on August 9, the International Day of the World's indigenous peoples. From 11:00 am onwards, the STP will hold a public vigil on the Platz der Republik to draw attention to the importance of language rights – with an installation consisting of cubes in the colors of the indigenous flag.

"On every continent, there are indigenous languages that ??are threatened with extinction," explained Yvonne Bangert, the STP's expert on indigenous peoples. "They are usually handed down in spoken form, but not taught in school. In addition, people who speak an indigenous language are often discriminated against. "Thus, parents often teach their children the majority language in order to give them better education and career opportunities – while it is often the grandparents that try to teach them the indigenous language, or it is not taught at all."

A summary of the report and the demands of the STP are attached to this press release, and there is a link to the complete study (in German). We can also send you a print copy upon request.

In addition, we would like to invite you to a panel discussion on language as a human right ("Sprache als Menschenrecht – indigene Sprachen wirksam schützen und fördern) on August 8 (starting at 6 pm), at the German Institute for Human Rights (Deutsches Institut für Menschenrechte), Zimmerstraße 26/27, 10969 Berlin. The panel discussion is organized by the STP and the German Society for the United Nations (DGVN). After the welcome by Dr. Lisa Heemann, General Secretary of the DGVN, there will be a discussion with Lars Christian Koch, Director of the Collections of the Staatliche Museen zu Berlin in the Humboldt Forum, Tjan Zaotschnaja, representative of the Itelmen in Kamchatka/Siberia, Alina Namunkura Rodenkirchen, language activist for the revitalization of the Mapuche language (Mapuzugun), and the linguist Christiane Wegener. Moderator: Dr. Theodor Rathgeber, freelance scientific author and development expert in the fields of human rights, minorities, and indigenous peoples.

The study can be downloaded here (currently only available in German) and a printed version can be purchased in the Onlineshop.