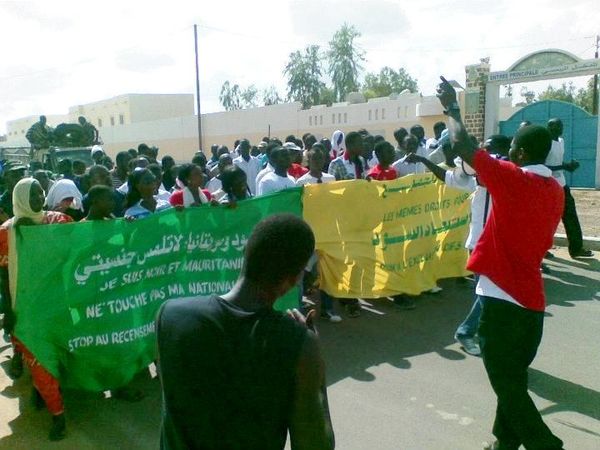 Shortly after the presidential elections on Saturday, the regime boasted that – for the first time in the history of the country – power had been transferred democratically; and not in a coup d'état. "But if Mauritania is now facing a constitutional crisis, the fiasco is self-inflicted," Delius emphasized. Picture: Magharebia via Flickr (CC BY 2.0) (2011)

Following the controversial presidential elections, the Society for Threatened Peoples (STP) has accused Mauritania's government of racism and methods of dictatorship in order to secure its power. The human rights organisation demanded the immediate release of more than one hundred people who were arrested in the course of protests against the outcome of last Saturday's presidential election, solely because of their dark skin colour. "The accusation that foreign powers are trying to destabilise the country by means of a wave of protests – brought forward by Mauritania's interior minister – is unfounded, and will only fuel racism against the long-discriminated black population. Mauritania's government is trying to systematically intimidate government critics by shutting down the Internet and summoning all opposition leaders to appear at the police. That's not what true democracy should look like," stated Ulrich Delius, the STP's director, in Göttingen on Thursday.

Shortly after the presidential elections on Saturday, the regime boasted that – for the first time in the history of the country – power had been transferred democratically; and not in a coup d'état. "But if Mauritania is now facing a constitutional crisis, the fiasco is self-inflicted," Delius emphasized. For the protests of government critics had been triggered by the fact that the presidential candidate favoured by those in power had prematurely declared himself the election winner. Without waiting for a statement by the national election commission, the former General Mohamed Cheikh El-Ghazouani claimed to have won the election in the first ballot, just a few hours after polling stations were closed. By now, the four most important opposition leaders have officially lodged a complaint against the election results.

The human rights organisation described the government's strategy of blaming foreign neighbouring countries for the protests as perfidious. "Mauritania's problems are homemade; as the power elite of Arabs and Berbers is unwilling to acknowledge the dark-skinned majority of the population as equal", Delius explained. For decades, the country has been dominated by an apartheid-like regime that also resorts to slavery. However, the young dark-skinned Mauritanians no longer accept their systematic marginalization but demand equal rights and more support, he added. Thus, it doesn't come as a surprise that the anti-slavery activist Biram Dah Abeid has become the most important representative of the opposition parties. Abeid had achieved the second highest number of votes in the elections.