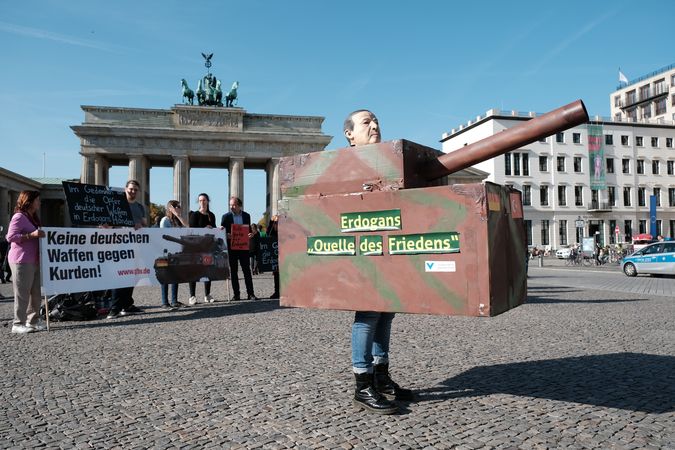 Protest meeting of the STP in Berlin. Picture: Hanno Schedler/STP.

The Society for Threatened Peoples (STP) has demanded Germany and the other countries of the European Union to stop financing Turkey if the Turkish military intervention in northern Syria is not stopped immediately. In particular, Europe should not support, either directly or indirectly, the establishment of the contested protection zone. "Europe must not tolerate crimes against humanity for fear of a refugee influx," stated Ulrich Delius, the STP’s director, in Göttingen on Thursday. The aim of the so-called protection zone is to carry out a population exchange – which would have to be seen as an internationally wrongful act.

Further, the STP criticized that the recent protests of the EU against the Turkish military offensive are half-hearted and unconvincing. Thus, it is presumptuous and totally unrealistic of Federica Mogherini, the EU High Representative for Foreign Affairs and Security Policy, to call both the Kurds and the Turkish government to moderation instead of naming the aggressor. Simple appeals to moderation will not help to protect the civilian population from new violence.

The Turkish Ministry of Religion also announced that, on Friday, all mosques of the Turkish-Islamic Union for Religious Affairs (DITIB) in Germany should hold prayers for a quick and successful occupation of northeastern Syria. The STP emphasized that the Federal Government should strongly condemn this: "In Germany, it should not be allowed to promote or glorify serious human rights violations and crimes against the civilian population," Delius stated. "…especially not in DITIB mosques, which had already celebrated the illegal invasion of the Syrian region of Afrin in January 2018." Because of the association's proximity to the Turkish Ministry of Religion and Erdogan's power apparatus, DITIB has been met with criticism in Germany for quite a while.