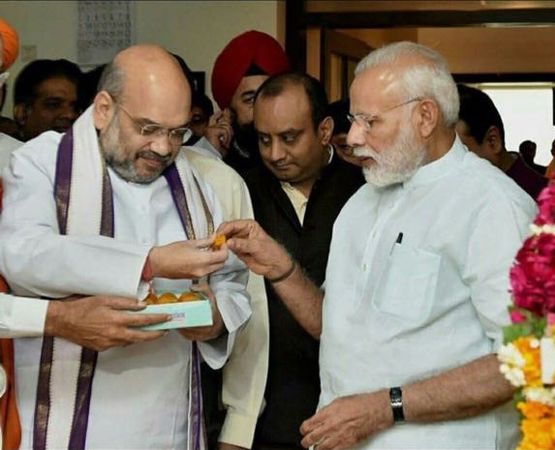 Over the weekend, India's Interior Minister Amit Shah (on the left, along with India's Prime Minister Narendra Modi) had caused a wave of indignation and protest by announcing plans to declare Hindi the national language of the country. Picture: Gieve Grand via Flickr (CC BY 2.0)

---- Göttingen, September 16, 2019 ----- The Society for Threatened Peoples (STP) accuses India's Hindu nationalist government of endangering linguistic diversity and the world's cultural heritage with its language policy. "India is unique in its linguistic diversity. The fact that India's government is planning to declare Hindi the national language is to be seen as an attack on the diversity of cultures in the country and all over the world," stated Ulrich Delius, the STP's director in Göttingen on Monday. Over the weekend, India's Interior Minister Amit Shah had caused a wave of indignation and protest by announcing plans to declare Hindi the national language of the country. The STP criticized that the controversial language policy of the Hindu nationalists is primarily aimed at the Hinduization of the country and at excluding members of minority groups.

It is especially the south of the country that is against the introduction of Hindi as the sole official language, because the plans of the Interior Minister would put an end to the current practice of recognizing and using regional languages ?as official languages in individual states – ??in addition to Hindi and English. The states of Tamil Nadu and Karnataka are especially critical, because their languages are among the 22 main languages ??of the country. Opposition politicians have criticized the initiative as a "declaration of war against federalism", warning against further attempts to divide the people of India over a language dispute. Only 45 percent of the population speak Hindi as their mother tongue. In June 2019, following massive protests, the Hindu nationalist government had already withdrawn a bill aiming at the introduction of Hindi as the third mandatory language in all schools.

This development is especially dangerous for the 197 indigenous languages in India, which – according to the UN World Cultural Organization (UNESCO) – are threatened with extinction as the people are under pressure to assimilate. There are around 104 million indigenous Adivasi living in India, accounting for 8.6 percent of the total population, and there is a unique variety of indigenous languages in the country. According to the constitution, there are only 22 main languages, but more than 121 are actually spoken. In addition, according to the 2011 census, there are still 1635 dialects.

Next Wednesday, the United Nations Human Rights Council (UNHRC) will address the disappearance of indigenous languages with a half-day symposium?? in Geneva. On the sidelines of this forum, the STP, together with three indigenous language experts and the human rights organization Incomindios, will present a human rights report on the conservation of indigenous linguistic diversity, demanding more commitment to protect these languages. The United Nations had declared 2019 the International Year of Indigenous Languages.