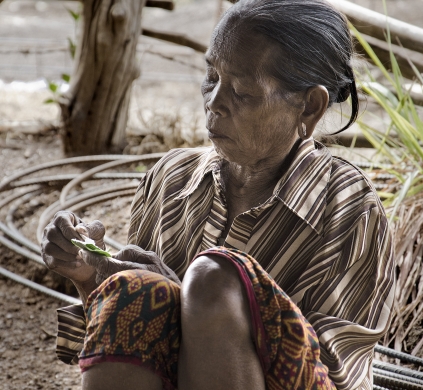 The Society for Threatened Peoples (STP) strongly condemns the deportation of 36 Christians, who belong to a persecuted indigenous population group, from Cambodia to Vietnam. "The forced relocation of these natives is a serious violation of the United Nations Refugee Convention, since the refugees are in acute danger in Vietnam," said the STP's Asia-consultant, Ulrich Delius, in Göttingen on Tuesday. The STP calls on Foreign Minister Frank-Walter Steinmeier and on the Federal Government for Human Rights Policy and Humanitarian Aid, Christoph Strässer, to ensure protection for the deported refugees. Vietnam is one of Germany's "strategic partners" – and one of the most important exporters of coffee, the cultivation of which causes continued human rights violations in the region where the refugees lived.

As became known now, the 36 members of the Jarai people from the central highlands of Vietnam had been arrested in the district of Kon Mom in the Cambodian province of Ratanakiri on Friday last week. They were deported to Vietnam immediately. A Cambodian who also belongs to the ethnic group of the Jarai was arrested for allegedly granting the refugees shelter and for helping them to escape to Phnom Penh, the Cambodian capital. "We are alarmed by the exodus of the indigenous Christians from Vietnam. Since January 2015, at least 70 indigenous people from Vietnam have sought refuge in Cambodia," said Delius. According to an official spokesman, four other indigenous refugees from Vietnam had already been arrested in the district Lumphat on February 24, and had subsequently been deported to their home country. Five more indigenous people from Vietnam had been deported back on February 13.

The approximately 410,000 Jarai in Vietnam live in the provinces of Gia Lai, Kon Tum and Dak Lak in the central highlands. They are therefore often referred to as "Montagnards", as mountain dwellers. They are persecuted for two reasons: they are Christians and indigenous peoples who demand their land rights. Many Jarai are Protestant Christians or belong to house churches that are officially not recognized, which is why they are restricted in their religious practice. Thus, they are not allowed to practice worship. Often, their Bibles are confiscated and burned – pastors are arrested and meetings are broken up by the police, believers are arrested and churches are destroyed.

However, the Montagnards are also persecuted because of their resistance against the land grabbing. During the 90s, the indigenous people lost large parts of their land, which are now used to produce coffee for export. According to the German Coffee Association (Deutscher Kaffeeverband), almost 20 percent of the coffee was exported to Germany.

In 1992, Cambodia signed the Refugee Convention of the United Nations, which expressly prohibits refugees to be deported if they are in acute danger. Yet, in spite of these international obligations, there is no protection for asylum seekers in Cambodia. For example, 20 Uyghur refugees from China were sent back in December 2009. Several members of this group were later sentenced to long prison terms in China.