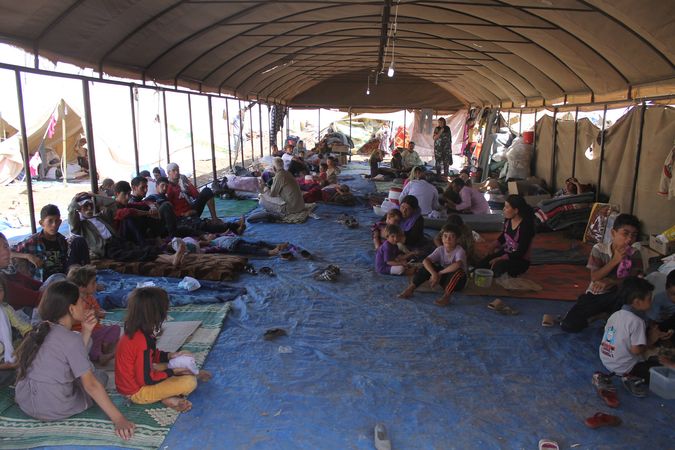 The Society for Threatened Peoples (STP) demands for international mediation between the central government in Bagdad and Irak-Kurdistan about the Yezidi-Area Sinjar. Picture: International Rescue Commitee/Rachel Unkovic via Flickr CC BY 2.0

On the occasion of the fourth anniversary of the genocide against the Yazidis in northern Iraq (August 3, 2014), the Society for Threatened Peoples (STP) demands international mediation between the Iraqi central government in Baghdad and Iraqi Kurdistan in the dispute over the Sinjar region, which is mainly inhabited by Yazidis. “The 280,000 Yazidis who are still forced to live as displaced persons in makeshift camps or with private hosts will not be able to build a future for themselves and their children if they can’t return home safely. Arab Iraq and Iraqi Kurdistan must finally settle the dispute about which part of the country Sinjar should belong to – and the international community should finally initiate talks in the interest of the survivors of crimes against humanity,” emphasized Kamal Sido, the STP’s Middle East Consultant, in Göttingen on Thursday. The human rights organization demands regional autonomy for Sinjar.

On August 3, 2014, IS terrorist militias had attacked the 400,000 Yazidi people living in the Sinjar region. According to the United Nations, about 5,000 Yazidis were killed, and many more were abducted. Around 430,000 Yazidis were forced to flee. It must be feared that many of the missing persons were murdered. Of the more than 5,000 abducted women and girls, at least 3,000 are still held hostage by IS. The imprisoned women were raped, forcibly married, or sold on slave markets – some of them also to Syrian Islamist groups of the so-called “Free Syrian Army”. Only 40,000 Yazidis have so far returned to the region, which was completely destroyed in the clashes with IS. “The Yazidi people are also in desperate need of assistance in rebuilding the region – and help in freeing the hostages,” Sido demanded.

On Friday, the Yazidi communities all over the world and their friends will commemorate the victims of the genocide in Sinjar. There will be numerous events in Germany, Europe, North America, Russia, Armenia, Georgia, and especially in Iraqi Kurdistan – but not in the region of Afrin in northern Syria, Sido emphasized. This Kurdish region has been under the rule of the Turkish army and Syrian radical Islamist groups since March 18. “After Sinjar, Afrin was one of the last regions of the Middle East where the Yazidi people were more or less able to live their lives in peace,” the human rights activist stated. “Now, the Yazidis are forced to flee from there as well. Like the Yazidis from the Sinjar region, they are dependent on international aid.”