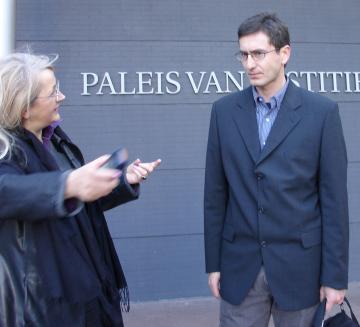 The Society for Threatened Peoples (STP) together with survivors of the UN's so-called "safe zone" in Srebrenica welcomed the verdict (July 5) handed down by a court of appeal in The Hague yesterday, in the first civil case brought by Srebrenica survivors against the Dutch government. The fate of the plaintiffs and their murdered family members was symbolic for the fates of all who suffered in the city on the Drina in eastern Bosnia, which had been under siege for four years.

"We welcome the fact that the Dutch government, together with international community, have finally acknowledged their responsibility for the 8,376 men and boys murdered, and for their surviving family members," said STP Secretary General Tilman Zülch today in Göttingen.

Eight years ago the family of Rizo Mustafic, an electrician murdered in Srebrenica, and Hasan Nuhanovic, translator for the Dutch who lost his father, mother and brother, filed their complaint at a district court in The Hague making the Netherlands responsible for the failure of their UN peacekeeping troops.

The parents and brother of Nuhanovic, a translator who worked for the UN, had been accepted on the Dutch soldiers' base in July 1995. Later they were sent to their certain deaths by, of all people, a Dutch commander who had been a friend Nuhanovic's, while Serbian troops just a few meters away were raping and killing Bosnian women and men. All three died.

The remains of Nuhanovic's father, brother and mother have since been exhumed, identified and given a proper burial. The remains of Rizo Mustafic will be interred on the upcoming 16th anniversary of the massacre of Srebrenica (July 11), together with 600 other identified victims, in Potocari.

"There was a third side in the Bosnian war of 1992-1995," stated Hasan Nuhanovic in a conversation with the STP this morning. "That was the international community, including the Netherlands and their troops, who within the UNPROFOR units were responsible for the security of the refugees inside the UN's so-called 'safe zone'." The greatest achievement of this verdict, according to Nuhanovic, is that this fact is no longer suppressed.