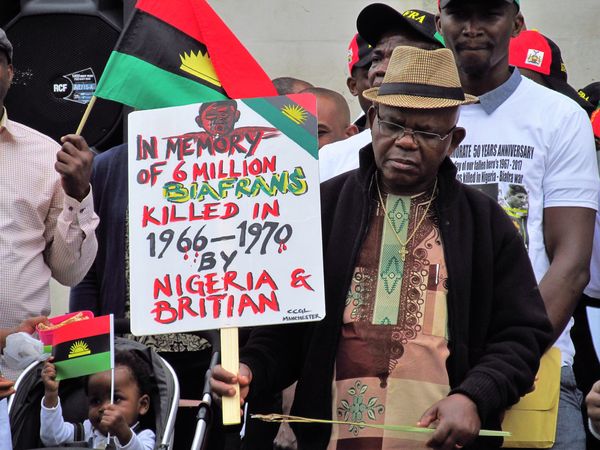 The Nigerian security forces will do everything possible to try and prevent public protests on the occasion of the 51st anniversary of Biafra’s declaration of independence. Picture: David Holt via Flickr CC BY 2.0

The Society for Threatened Peoples (STP) warns about unrests and human rights violations in southeast Nigeria on Wednesday, on occasion of Biafra Remembrance Day. “The Nigerian security forces will do everything possible to try and prevent public protests on the occasion of the 51st anniversary of Biafra’s declaration of independence. They will not shy away from intimidation and arbitrary arrests,” stated Ulrich Delius, the STP’s director, in Göttingen on Monday. Last week, more than 100 Biafra-activists had been arrested in various states of south-eastern Nigeria – and criminal proceedings were initiated against at least 41 detainees.

On Wednesday, there might be mass arrests – as several Biafra-organizations have called for public events in favor of the independence movement. The police have announced massive controls and a policy of zero tolerance towards protests from Biafra activists or regarding the hoisting of flags.
14 Biafra-organizations have called for a general strike – asking the people not to leave their homes on occasion of the day of remembrance. It is expected that tens of thousands of Biafrans will participate in this silent protest. Even the most influential Biafra-organizations, MASSOB and IPOB, have supported this call for civil disobedience. “They know that the police and the armed forces will ruthlessly break up any form of public protest,” Delius emphasized. Over the past five years, several hundred Biafra activists lost their lives in demonstrations. From the viewpoint of the police forces, they have no rights – which is why they are treated as terrorists.”

Even journalists of independent Nigerian media are suffering from the relentlessness of the security forces. Last Tuesday, for example, Emeka Ihiegbulem, a correspondent for the prestigious newspaper “Punch”, had been beaten up by police officers following an interview with Biafra activists. He was arrested and mistreated while in detention.

“Nigeria’s politicians failed to solve the Biafra-issue. Instead of entering a political dialogue with the Biafra activists, they sent police forces and soldiers. This, however, will only lead to new problems, as the disappearance of Nnamdi Kanu shows,” criticized Delius. The founder of IPOB and Radio Biafra and several of his family members have been missing since soldiers raided his house in September 2017. The army has so far refused to clarify the whereabouts of the abducted.