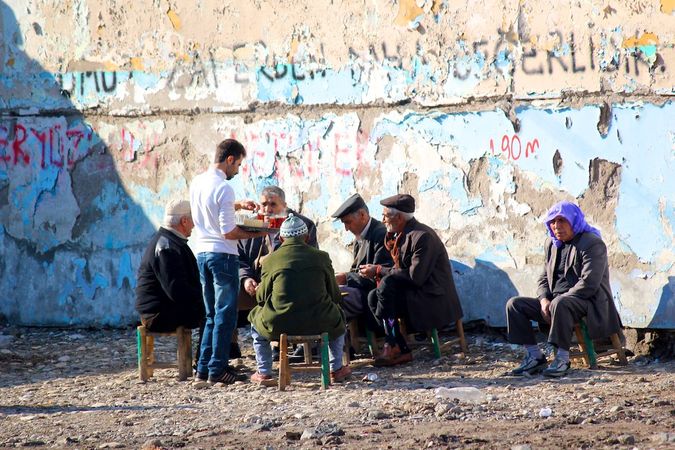 The southeast of Turkey has not come to rest since September 4: There is a curfew in Cizîra Botan (Cizre), and there are snipers on minarets and other high towers in the city. Several other villages in the Kurdish regions of Turkey were cut off from the outside world by the Turkish security forces. This also affects the central district of Sur in Diyarbakir, the unofficial capital of the Turkish Kurds. In addition, the Turkish government decided to arrest elected Kurdish representatives, among them the popular former mayor Abdullah Demirbas, for campaigning against the arrests of Kurdish youths. Demirbas was imprisoned for several years once before, because he had advocated for the use of the Kurdish language.

In his position as major, Demirbas showed commitment towards the rights of minority groups. Against the resistance of Erdogan’s ruling AKP-party, he decided to have an Armenian and a Syrian Orthodox Church restored. He also paid visits to Israel, where he tried to establish contacts to Jewish people who once lived in Diyarbakir and the Kurdish regions. In 2007, he was relieved of his duties for the first time, because he had spoken Kurdish in a matter of public interest. Following his re-election in 2009, the Turkish authorities brought new charges against him. Two months after he took office, he was sentenced to two years in prison for “language crimes”. Due to his poor health, he was released early. Now, he is in poor health too – and his daughter Ezgi Demirbas is very concerned: “My father’s health is deteriorating. Since last night (September 14), the doctors and the lawyer who is present in the hospital are reporting that his condition is getting worse.”

Meanwhile, the arrest of Abdullah Demirbas is leading to more tensions in south-eastern Turkey. Supporters of the Islamist AKP and the nationalist MHP-party are trying to denounce the democratic Kurdish opposition – while it is precisely this opposition that has been demanding an end to the violence between the Kurdish PKK and the Turkish army for weeks. Thus, the co-chairman of the Kurdish Democratic Party (HDP) and the former chairman of the Human Rights Association of Diyarbakir publicly demanded the Kurdish PKK and the Turkish government to stop the violence and to re-enter peace negotiations. The imprisonment of renowned representatives of the democratic opposition will most probably increase the tensions. The Assyrians/Aramaeans/Chaldeans, Yezidis and Armenians who are still living in southeast Turkey are already affected by Demirbas’ arrest. While he advocated for tolerance and understanding, the ruling AKP-party has been trying to propagate an Islamist ideology among the mainly Muslim-Sunni Kurds. This ideology is a great danger for them and the millions of Alevis living in Turkey.