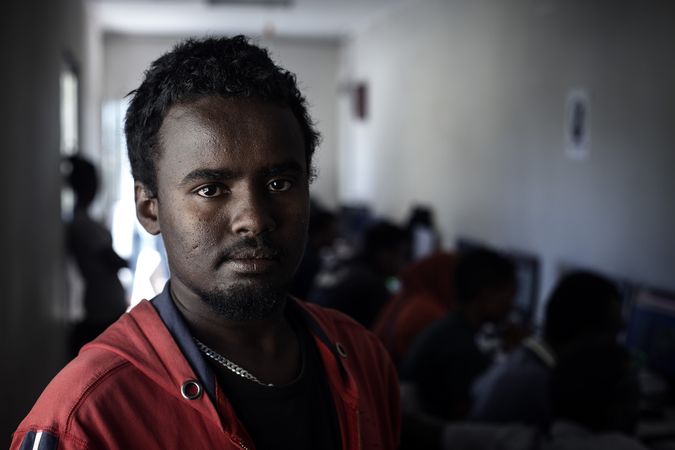 The Israeli government wants to get rid of 38,000 refugees from Eritrea and Darfur and has announced to deport them if they don’t leave the country voluntarily. Photo: ODI/Gabriel Pecot via Flickr

According to the Society for Threatened Peoples (STP), refugees from Eritrea and Darfur (Western Sudan) can’t hope for security or future prospects in Rwanda. “Israel is about to deport the first refugees from Eritrea. As they don’t have identity papers or financial means, they will be exposed to arbitrariness by the authorities and the local population in Rwanda,” said Ulrich Delius, the STP’s director, in Göttingen on Thursday. Eritrean refugees who had recently resettled from Israel to Rwanda voluntarily had made bad experiences. Without protection, they were treated as fair game. Left to their own devices, and without documents, they don’t have a chance to leave Rwanda legally.

“The Eritreans’ problems won’t be solved by deporting them to Rwanda – they would only be traumatized,” Delius stated, urging Israel’s immigration authorities to reconsider why the Eritreans are leaving their home country. Last week, an appeals court in Jerusalem had issued a groundbreaking statement, granting asylum to an Eritrean who had fled from his home country because of the unlimited military service there. The verdict is of great importance, as most of the Eritrean refugees are on the run for exactly that reason. According to the United Nations, an unlimited military service is to be seen as a crime against humanity. In Eritrea, many soldiers are forced to serve in the army for ten or even fifteen years.

“For Darfuris, the situation is even more precarious. They have little chance that Israeli courts will provide protection, even though Western Sudan has been committing genocide crimes for 15 years,” Delius criticized. “But neither Rwandan leader Paul Kagame nor the other states in the region have an interest in addressing the genocide and in snubbing the Sudanese government. Instead, they sugarcoat the lawlessness and terror of the state-backed militias to uphold the fiction of peace in Darfur.”

The Israeli government wants to get rid of 38,000 refugees from Eritrea and Darfur and has announced to deport them if they don’t leave the country voluntarily. On Wednesday, the first seven of the 27,500 Eritrean refugees were deported. As a result, 750 Eritreans who are kept detained went on a hunger strike.