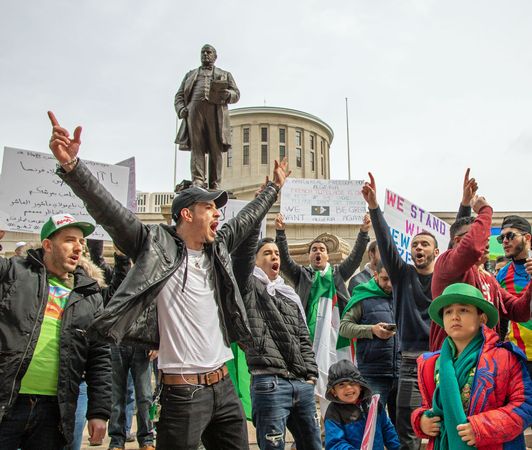 Algeria's powerful army generals are trying to silence and crush the democracy movement – and they won't shy away from systematic violations of the freedom of expression or of the freedom of the press or assembly. Thus, the presidential elections, which are scheduled for December, will be a farce Picutre: Patrick Gruban via Flickr (CC BY-SA 2.0)

Following the arrest of more than 250 supporters of Algeria's pro-democracy movement within a week, the Society for Threatened Peoples (STP) calls for an end to the arbitrary arrests of protesters in the North African country. "Algeria's powerful army generals are trying to silence and crush the democracy movement – and they won't shy away from systematic violations of the freedom of expression or of the freedom of the press or assembly. Thus, the presidential elections, which are scheduled for December, will be a farce," stated Ulrich Delius, the STP's director, in Göttingen on Saturday. 64 members of the pro-democracy movement "Hirak" were arrested only yesterday. The protests are directed against the upcoming presidential election on December 12. There will only be five pro-government candidates.

The human rights organization criticized that local and foreign journalists are being intimidated and kept from reporting on the protests, and that there are targeted measures to silence critical voices on social media. For example, hundreds of Hirak supporters were systematically attacked with critical comments on Facebook to provoke answers that could lead to temporary shutdowns of their Facebook pages. With more than 22 million Facebook users, the social network is one of the most important sources of information in Algeria. In several European cities, people from Algeria held protests in front of Facebook offices in order to draw attention to the fact that Algeria's rulers are instrumentalizing the network for their purposes.

The Algerian authorities have been intimidating journalists for several weeks, aiming to stifle reports on the protests, which started in February 2019. Thus, on November 19, 2019, four journalists of the government-loyal newspaper "Temps d'Algerie" were suspended after they criticized their newspaper for publishing an electoral call. On November 9, a total number of 300 journalists published a protest letter against the arbitrary arrest of three media people.

Meanwhile, the mass arrests continue, despite the protests. Last Thursday, for example, 150 protesters were arrested during the night – and another 37 were detained for disrupting electoral assemblies. The arrests are supposed to intimidate the protesters, but the demonstrations are growing larger week by week. Many detainees are released after a short time, but dozens remain in custody. Last Wednesday, a protester was sentenced to two years in prison for disrupting an election meeting. The protesters are demanding the elections to be suspended, emphasizing that the elections will be nothing but a farce, due to the small number of candidates.