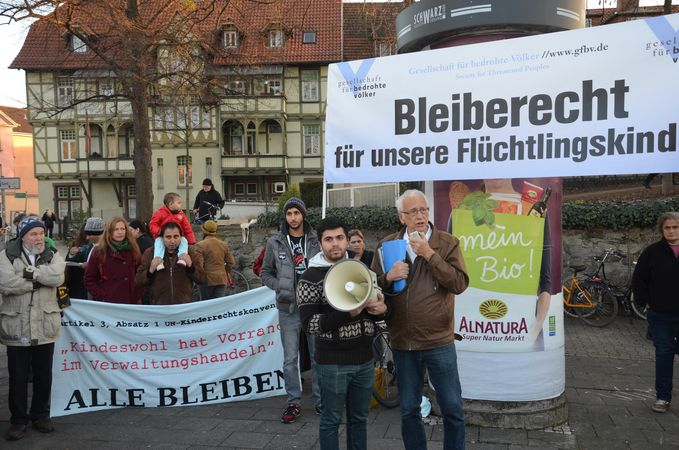 Tilman Zülch during a virgil in Göttingen in December 2015 where activists demanded the right of residence for longtime tolerated refugee children. © Jan Klauke for STP

shocked by the pitiless deportation policy of Lower Saxony, I would like to address you on behalf of the Society for Threatened Peoples (STP). We are appalled by the cold-heartedness with which you and the authorities are deciding on the fate of people who were born in Germany or grew up here. We can hardly believe that you, Minister Pistorius, are referring to the new legal provisions to justify the traumatizing policy of forcing children out of their homes just because their parents have the “wrong” passport. They would surely not be treated this way, if they were Jewish children whose parents had come to us from abroad.

The federal government, the politics of which are influenced by the SPD, has so far accepted more than one million refugees – and there are still hundreds arriving every day. The public is growing more and more discontent with this policy. Are you deporting thousands of children, youths and elderly people – who have been living here for many years – to set an example and calm things down? In our opinion, it is extremely unfair to let these German-speaking children and youths suffer, to deport them to countries in which they never felt at home and never will. Your actions are political window dressing to calm down the public: If 10,000 children are deported during the coming weeks, this corresponds to the number of new refugees arriving here within three days. Thus, the number of deportees is negligible, and the deportations will not help to solve the entire refugee problem.

We are calling upon all Social Democrats who – in their hearts and their actions – still feel committed to the ideal of humanity, to take a stand against the government’s deportation policy. Youths in handcuffs, elderly and sick people, families who have been living in Germany for decades or even a quarter of a century were expelled from the country this Wednesday. This is inhuman and irresponsible! We are ashamed of this, because of the reminiscence to the deportations carried out by the totalitarian regimes of the Nazis and the Stalinists.

We would like to remind you that, in 1999 under Gerhard Schröder, the SPD-led government and other European countries agreed on a military intervention to stop the Serbian troops from killing 10,000 Albanians in Kosovo. However, the Roma minority was not protected when the Albanian nationalists chased them out of the country under the eyes of the NATO troops – including German soldiers! Our NATO soldiers did not manage to prevent 70 of 75 of their villages and neighborhoods from being ransacked and destroyed, although the signatories had asked the Bundeswehr to do so. Many Roma sought refuge in our country back then. Germany is partly responsible for their fate, and the refugees cannot simply be expelled!

Our appeal to you: Refugee children who were born and raised here and families who have been living here for many years must be allowed to stay permanently. A life in constant insecurity and the constant threat of losing one’s home will push people into despair and undermine their confidence in the state and society. Don’t allow this to happen any longer!

In the years 1979 to 1981, our human rights organization – supported by Simon Wiesenthal, who was President of the European Parliament back then, by Simone Veil, the former chairperson of the Central Council of Jews in Germany, as well as by Heinz Galinski and Indira Gandhi – managed to put an end to the ongoing plight of the Sinti in Germany. We successfully fought for the recognition of the Sinti and Roma identity, the repatriation of hundreds of German Sinti, and urged the Federal Republic to recognize the genocide and to pay compensations. Now, all this is questioned by chasing thousands of children out of the country!

As a child, I, the author, experienced what it is like to be expelled. Many Germans share his fate. Against this background, we expect solidarity for the refugees – especially from the Social Democrats.

Secretary General of the Society for Threatened Peoples

“I consider the Society for Threatened Peoples very important. At the end of the 20th century, when thousands of people are threatened by nationalism and chauvinism, when death and hunger kill thousands, its activities force the general public to become active and to combat injustice. For this reason I consider that everyone has the responsibility of supporting its activities morally and also financially.”

Marek Edelman, the last surviving commander of the Jewish resistance in the Warsaw ghetto, Lodz (1919-2009)

Human rights organizations such as the Society for Threatened Peoples are “…the strong arm of the world conscience, the first elements of a worldwide working justice, of which no government by terms of its own definition is capable.”

Yehudi Menuhin, violin virtuoso (Acceptance speech at the award ceremony of the Peace Prize of the German Book Trade in 1979)

“The Society for Threatened Peoples was and is a shaft of light and trace of hope at a time in which Europe and on the other continents peoples, minorities or refugees are threatened in their existence.”

“The question of human rights deserves the place of a high political task. Occasional protests against unjust systems are not enough. It is for example of great importance that organisations like ‘Amnesty International’ or the ‘Society for Threatened Peoples’ are listened to; that purposeful citizens stand up in public without fear of intimidation or disadvantage – right here in the Federal Republic.”