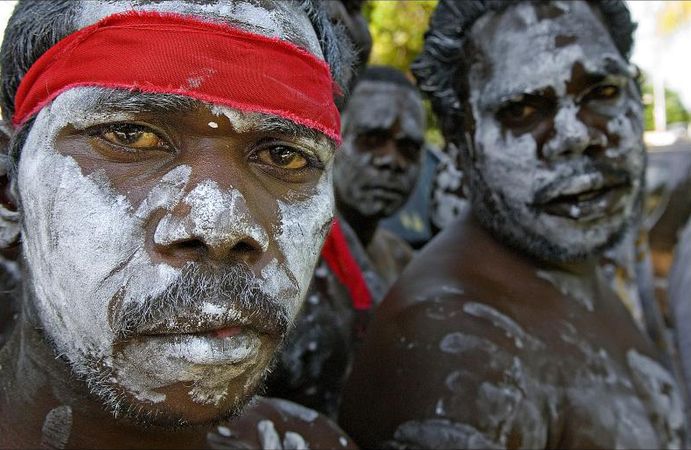 On Friday (November 27), on occasion of the global day of action of the Australian initiative #SOSBLAKAUSTRALIA, the Society for Threatened Peoples (STP) will hand over an appeal to the Commonwealth Secretariat in London: The appeal, which focuses on the rights of the Aboriginal Australians, was signed by 2,000 German and European supporters. “The Aborigines need clear agreements with the majority society. If they are not granted clearly defined rights, they will not be able to achieve self-determination – leaving them dependent on the government and the authorities,” stated the international human rights organization on behalf of the ethnic and religious minorities. “Following centuries of exclusion, racism, oppression and persecution, most of the 460,000 aboriginal Australians are now living on the fringes of society. They have no real perspective, and many of them are ill and uprooted.”

The STP’s appeal is addressed to Kamalesh Sharma, the Secretary General of the Commonwealth of Nations, and will be handed over as part of a protest action initiated by the “London Australia Solidarity Activism Hub”.

In June, the STP had already addressed an appeal to the Head of the Commonwealth, Queen Elizabeth II. Further, the STP held a vigil during Malcolm Turnbull’s inaugural visit to Berlin in November, urging the Australian Prime Minister to finally enter a credible dialogue to treaties with the Aboriginal Australians.

According to the STP, the situation of the Aboriginal Australians is “depressing”. The life expectancy of the indigenous people is ten to twelve years shorter than that of the majority population – and the infant mortality is twice as high. An alarmingly high number of Aboriginal Australians are dying from diseases that could be treated, such as diabetes. 27.4 percent of all prison inmates in Australia were of Aboriginal descent in 2013-2014 – although they only make up 2.3 percent of the population.

Recently, on November 9, 2015, the UN Human Rights Council criticized Australia in this respect. More than 100 UN member states submitted more than 300 suggestions on how to improve the situation of refugees and the indigenous population – and the STP presented the UN with a status report on the human rights situation of the Aboriginal Australians.

When the meeting of the government representatives of the Commonwealth of Nations CHOGM in Malta starts on November 27, the concerns of the Aboriginal Australians should be on the agenda!