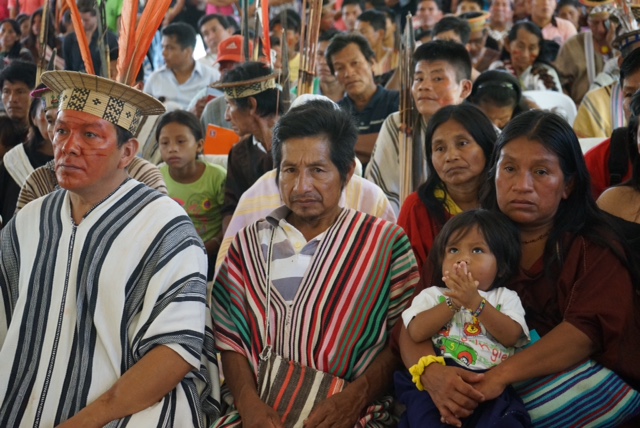 On their way to a common future the Ashaninka from Brazil and Peru start to unite. The First Binational Congress of the Ashaninka People from Peru and Brazil brought together more than 140 Ashaninka present in the meeting, coming from 8 departments in Peru plus the Ashaninka from Apiwtxa on September 21 and 22. The meeting was organised by the Organización Regional AIDESEP Ucayali – ORAU, Asociación de Comunidades Nativas Ashaninca de Masisea y Callería – ACONAMAC and Associação Ashaninka do Rio Amônia – APIWTXA (Acre-Brasil), with financial support from the Alex Soros Foundation.

The Ashaninka represent one of the biggest indigenous populations in the Amazon, with approximately 100.000 people. This historic meeting had as objectives to assess the situation of the Ashaninka territories and the implementations of their rights as indigenous peoples, as well as to strengthen their organisations to work towards a common goal.

The Ashaninka from Apiwtxa presented their history, telling about their fight against illegal loggers to demarcate their land, and their current experience with the protection of their territory and the sustainable management of their resources. Together the delegations wrote a declaration to be presented at the Climate Conference – COP 21 in Paris in December this year, and also a declaration to the government of Peru. They had the opportunity to give the declaration to the Governor of Ucayali Department – Mr. Manuel Gambini Rupay, and he handed in the title of the Saweto – Alto Tamaya Native Community to the chief Ergilia Rengifo López. The recognition of this territory happened one year after the murder of four indigenous leaders, then chief Edwin Chota, who were struggling for their rights and denouncing the illegal logging and the drug traffic in that territory.