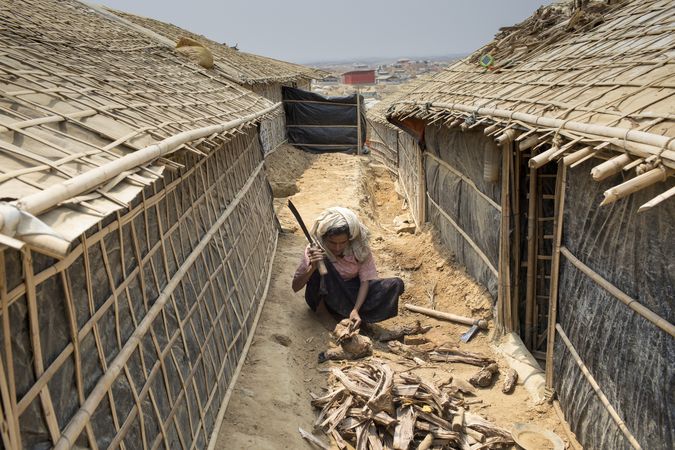 A Rohingya woman in Kutupalong, Bangladesh. The Society for Threatened Peoples appeals to stop the deportation of Burmese refugees if their Human Rights cannot be guaranteed. Picture: European Union/Bangladesh via Flickr CC BY-NC-ND 2.0

Prior to the planned talks on a possible repatriation of 750,000 Rohingya refugees, the Society for Threatened Peoples (STP) appealed to the Foreign Minister of Bangladesh not to agree to a repatriation if the refugees are not given guarantees regarding their human rights. “As long as Burma refuses to recognize the Rohingya as equal citizens, there will be no political solution to the Rohingya question – and it would be irresponsible to send them back to their home country,” says the STP’s letter to Mahmood Ali. On Tuesday, Ulrich Delius, the STP’s director, demanded a humanitarian solution for about 4,600 refugees who are trapped in the border area between Burma and Bangladesh: “It is inhumane that these refugees have been trapped in no man’s land for almost a year and that no one feels responsible.” Foreign Minister Ali will be visiting Burma on Wednesday.

Currently, helpers from the International Committee of the Red Cross are only able to provide the refugees in the border area with aid supplies twice a month – from the territory of Bangladesh. “This is a humanitarian scandal and a shame to humanity! The Rohingya refugees are in mortal danger, and they must not be forgotten by the international community,” the STP demanded. Burma has so far refused to repatriate the refugees in the border area, stating that they are seen as supporters of the rebel organization ARSA. The inhabitants of the makeshift camps have strongly rejected such allegations.

The STP also urged Burma and Bangladesh not to try and deceive the international public regarding a comprehensive repatriation of the Rohingya refugees in order to reduce international pressure. So far, almost only Hindu refugees have been repatriated. After decades of discrimination, marginalization, and persecution, the Rohingya, as members of a Muslim minority, must be granted their fundamental human rights before they can voluntarily return to Burma. However, despite massive international pressure, Burma’s government under Nobel Peace Prize winner Aung San Suu Kyi has so far been reluctant to recognize the Rohingya as an ethnic minority and as equal citizens.