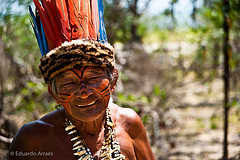 The Society for Threatened Peoples (STP) is alarmed by breaking news concerning violence against a group of Amazonian Indians who had been living in voluntary isolation until they were "discovered" just recently. "Apparently, these natives were forced to flee from attacks by loggers and drug smugglers in the border area between Peru and Brazil," criticized Yvonne Bangert, the STP's expert on questions concerning indigenous peoples, in Goettingen. "We urge President Dilma Rousseff to finally hear the warnings of the Ashaninka, who live close to the secluded indigenous communities and who see themselves as their "brothers" and their advocates. The Ashaninka have been reporting violent attacks of illegal invaders in the rainforests for quite a while already."

The indigenous peoples have repeatedly demanded the establishment of a protected area for the secluded indigenous communities on both sides of the border, in order to prevent attacks on these particularly vulnerable peoples. "There is no time to lose," warned Bangert. "That's why we support an according request which José Carlos Meirelles – a former representative of the Brazilian Indian Association FUNAI – addressed to politicians and the public in Germany, Austria and Switzerland in 2011. Unfortunately, no safe refuge for the Indians was established yet."

The experiences of the Surui in the Brazilian state of Rondonia are to be seen as a sign of warning: Their number has decreased from about 5000 to just under 300 after they made contact to the outside world about 40 years ago – mainly due to infectious diseases and hunger. As long as there is no protected area for the voluntarily isolated indigenous communities in Peru and Brazil, the only possibility to avoid unwanted contact would be for FUNAI to take care of their protection and to establish more observation posts along the borders to the indigenous peoples' territories.

According to various estimates, there are about 50 to 90 voluntarily isolated indigenous communities in Brazil – and about 20 more in Peru. Most of them moved further into the forests decades ago, after negative experiences with, for example, rubber tappers. Their decision to live in seclusion must be respected. However, the increasing deforestation is destroying more and more of their retreat. Also, the oil and gas production on both sides of the border has increased the pressure on the forest and its inhabitants.