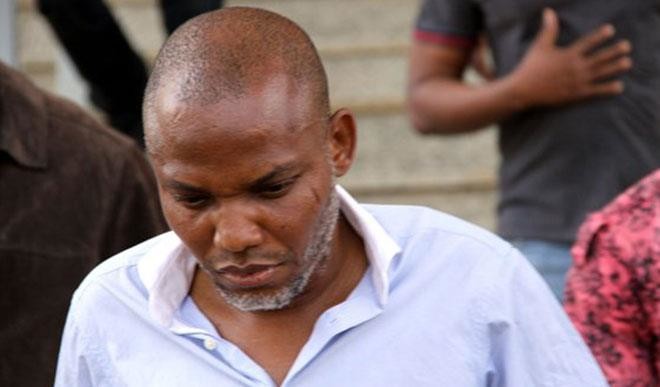 According to information of the Society for Threatened Peoples (STP), there will probably be a general strike in southeastern Nigeria next Friday. Biafra-activists of the IPOB (Indigenous People of Biafra) are calling for a general strike on that day to demand the release of the imprisoned human rights activist and journalist Nnamdi Kanu. The STP has appealed to the authorities of Nigeria not to use brute force and mass arrests to break up the peaceful protests of the Biafrans again. At least 69 Biafra-activists have lost their lives in massive police operations since December 2015.

“The Biafra-crisis can not be solved by the force of arms. Instead, Kanu must be released – as a court had ordered after his first trial. His release would be a first step towards a political dialogue between the government and the Biafran independence activists,” said Ulrich Delius, the STP’s Africa consultant, in Göttingen on Wednesday. “If Kanu is kept in custody any longer, this will only lead to more tensions – and it will confirm the impression that the Biafra-activists are to be silenced by illegal methods.”

Kanu is the operator of Radio Biafra and the founder of the Biafra-organization IPOB. On September 26, 2016, a trial against him is to be continued before the Supreme Court in the Nigerian capital Abuja. The hearing was originally scheduled for June 20, 2016, but had been postponed to September. The civil rights activist is facing charges of alleged treason in six cases. He was arrested in October 2015 and was initially charged with terrorism and conspiracy. When the allegations were dropped and his release was arranged, the Attorney General accused him of treason.

Prior to the general strike, twelve IPOB supporters were arrested in the state of Enugu on Monday. The police accused them of trying to persuade traders to participate in the general strike. Further, four Biafra-activists got killed in clashes between demonstrators and police on the occasion of the 17th anniversary celebrations of the Biafra-organization MASSOB (Movement for the Actualization of the Sovereign State of Biafra) on September 13, 2016, near the city of Onitsha in Anambra State. Many protesters were injured, 13 men and one woman were arrested. The Nigerian journalist Uchenna Inya of the newspaper “New Telegraph” was arrested and interrogated as well, because he had started working on a report on MASSOB. The journalist, whose laptop was confiscated, was released again after five hours. The Nigerian Union of Journalists protested against the arrest and against attempts to intimidate media representatives.

In spring 1967, the south-east of Nigeria – which is mainly inhabited by Christian Ibo – had tried to become independent as Biafra. However, the government prevented this by leading a cruel war against the civilian population, which culminated in a genocide. More than two million Ibo were killed, most of them children. This crime is a taboo topic in Nigeria today.