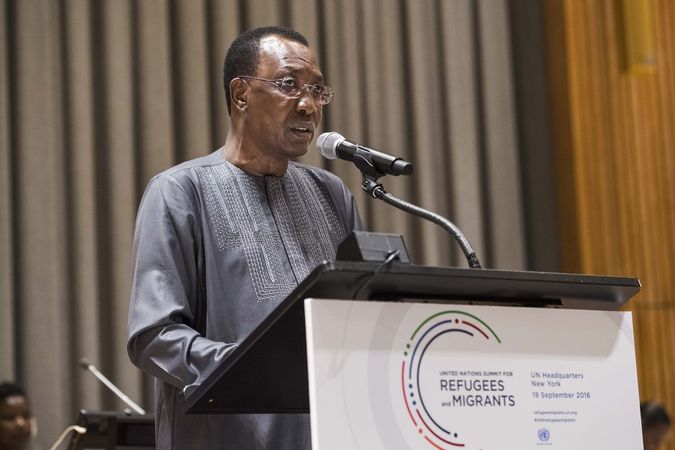 "Déby is responsible for arbitrary arrests of regime opponents and for fueling conflicts on the continent in order to offer himself as a ‘fire fighter’.” Photo: Amanda Voisard/UN Photo, Idriss Déby President of Chad

The Society for Threatened Peoples (STP) accuses the German Federal Government of betraying its own principles in the context of its Africa-policy. “According to the guidelines concerning the Federal Government’s Africa-policy, it is necessary to encourage good governance and democratization. Nonetheless, there are initiatives to enter pacts with autocrats and dictators,” said Ulrich Delius, the STP’s Africa-expert, in Göttingen on Wednesday. The human rights organization expressed sharp criticism on occasion of the visit of the President of Chad, Idriss Déby, who will hold talks with Chancellor Angela Merkel in Berlin on Wednesday. “The catastrophic human rights situation in Chad must be addressed as well,” Delius emphasized. “As a long-term president, Déby has been ruling the country with an iron fist for 26 years. He is responsible for arbitrary arrests of regime opponents and for fueling conflicts on the continent in order to offer himself as a ‘fire fighter’.”

According to the Libyan dictator Gaddafi, Déby recently fueled the civil war and the serious human rights violations in the Central African Republic by supporting the Seleka militias. At the same time, he was involved in the Boko-Haram crisis and the Mali conflict, presenting himself as a military leader whose soldiers might be able to fight back the Islamic extremists. “For decades, Déby could rely on the Western countries to ignore the human rights violations in Chad. He also benefits from strong support by France, whose elite soldiers saved him from being overthrown more than once.”

“The President of Chad represent the ‘old’ Africa in which powerful despots aim to suppress critical voices instead of supporting democratization,” said Delius. It was only last Friday that the regime critic Dinamou Daram was arrested in Chad. The head of the Socialist Party PSF, which belongs to the FONAC opposition alliance, had called for a tax boycott as a means of protest against the human rights violations and bad governance. Déby had appointed his eldest daughter as deputy cabinet minister on September 29, 2016. For fear of being overthrown, he has also put members of his Zaghawa clan or family members in other key positions in the fields of politics and economics.