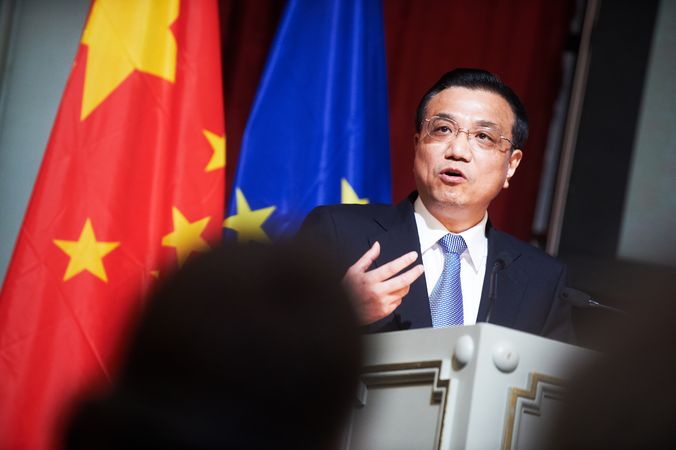 The STP appealed to Chancellor Merkel to confront Li Keqiang with her concerns about the ongoing serious human rights violations against the Uyghurs and Tibetans. Photo: Friends of Europe via Flickr

The Society for Threatened Peoples (STP) warns against a closer cooperation between Europe and China in shaping a new world order. “A close alliance with China would not be based on common values, but a sellout of Europe’s fundamental values – such as the rule of law and human rights. An alliance like this would be fatal, because – under the leadership of China’s governor Xi Jinping –arbitrariness, lawlessness, excessive surveillance, and even disrespect for the country’s very own laws have become a state principle,” criticized Ulrich Delius, the STP’s Asia expert in Göttingen on Tuesday. China’s Prime Minister Li Keqiang will meet up with Chancellor Angela Merkel in Berlin on Wednesday and take part in the EU-China summit in Brussels on Thursday and Friday.

Due to the EU’s disappointment about the new US government’s approach to climate change and world trade, the EU is openly discussing a closer cooperation with China. “However, a few common interests cannot hide the fact that the People’s Republic is not a reliable partner. Promises regarding human rights or economic issues are often broken,” said Delius. “In addition, a closer cooperation with the Chinese government would also be a catastrophic signal for China’s persecuted human rights activists, lawyers, and members of the nationalities. An alliance with Beijing would not only be detrimental to any commitment towards human rights in the People’s Republic, but would also undermine international human rights. “For example, China is fighting for new international laws allowing the nation states to exert absolute control and censorship on the Internet.

The STP appealed to Chancellor Merkel to confront Li Keqiang with her concerns about the ongoing serious human rights violations against the Uyghurs and Tibetans. Every month, there are new laws and decrees in Xinjiang / East Turkestan that are to be seen as violations of the human rights of the Uyghurs and as attempts to legalize arbitrariness by the security forces. Thus, the new anti-terror laws are specifically aimed at limiting the religious freedom, freedom of expression, and freedom of assembly of the Muslim Uyghurs.

In Tibet, China’s security forces are following a policy of intimidation and terror. Basic human rights are disrespected. According to the STP, the targeted destruction of large parts of the Buddhist teaching institute Larung Gar clearly shows that the Tibetans are not free to live according to their religious belief. On May 19, 2017, another monk had burned himself as a form of protest against China’s Tibet policy. The spectacular suicide was the 150th self-immolation in protest against the persecution of the Tibetans since 2009.