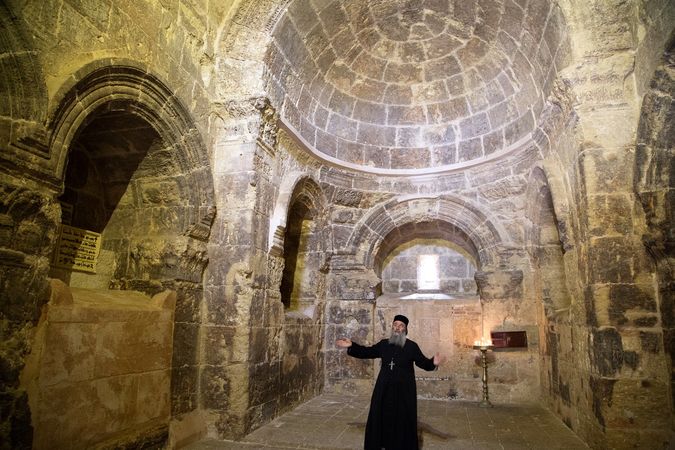 A priest prays in the monastery of Deir az-Zafaran, a Syrian Orthodox monastery, a few kilometers east of the southern Turkish city of Mardin in the Tur-Abdin Mountains. Photo: umutkacar via iStock

Shortly before Christmas, the Society for Threatened Peoples (STP) would like to draw attention to the situation of the Christians in the Middle East. “The believers are trying to escape from the ‘Cradle of Christianity’ due to the ongoing violence. The 2000-year history of the Christians in this region might soon be over,” says Kamal Sido, the STP’s Middle East consultant. “A hundred years ago, the Christians still represented 20 percent of the population of the Middle East. Now, it is only about three percent.” Most of the Iraqi Christians fled or were expelled during the past three decades. Their number has decreased from 1.5 Million to only 300,000 today. In Central Syria, the ‘Islamic State’ (IS) has gained influence again, which is a threat to several villages with a Christian population between Aleppo and Damascus – such as Qaryatain or Maalula. Even the few Christians in Turkey are increasingly under pressure due to the intensified Kurdish conflict and the rigorous measures taken by Turkish President Recep Tayyip Erdogan. The only Christian mayor in Turkey, Februniye Akyol, was removed from office, and her Kurdish colleagues were imprisoned.

“Terror, violence, and religious intolerance have led to significant changes in the lives of millions of people in the Middle East,” Sido criticized. “The Christians and members of other religious minorities such as the Yazidis or Mandaeans must be able to rely on their freedom of belief – guaranteed by the state and supported by society – or they will hardly be able to survive there.” IS has been driven away from most of the Christian communities at the so-called Nineveh plain to the north and the east of the embattled metropole Mossul in the north of the country, but many Christians and Yazidis will not be able to return to their villages unless the international community can guarantee protection from Sunni and Shiite extremists.

The STP also recalled the fate of two bishops from Aleppo who were abducted in April 2013. “What happened to the spiritual leaders of the Syrian Orthodox and the Greek Orthodox Church of Aleppo – who were kidnapped close to the Turkish border, to the west of the Syrian commercial city – reflects the hopeless situation of the Christians in Syria,” said Sido. Mor Gregorius Yoanna Ibrahim and Boulos Yazigi had repeatedly tried to work towards a peaceful coexistence of the different ethnic and religious groups in their country. Both of them had called for reconciliation, forgiveness, and dialogue, and they had tried to find ways to put an end to the violence in Syria. “Their commitment as intermediaries, ambassadors, and human rights advocates in the ongoing civil war should be an example to all of us.”