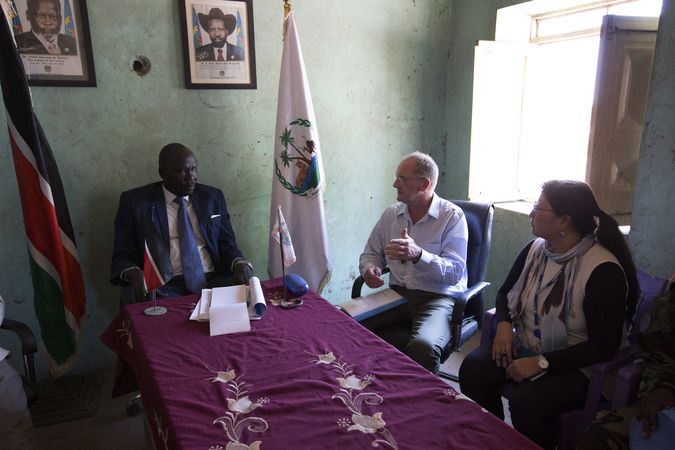 The organisation Unmiss enters the dialogue with the government of the Southern Sudan. The main opponents Salva Kiir and Riek Machar signed a new peace contract in Khartum. Picture: UNMISS/Eric Kanalstein via Flickr CC BY-NC-ND 2.0

The Society for Threatened Peoples (STP) is skeptical about the signing of a new peace treaty between the conflict parties in South Sudan. “It is very doubtful that the negotiated distribution of power will bring lasting peace to the country. There is still a lack of trust between the conflict parties,” criticized Ulrich Delius, the STP’s director, in Göttingen on Monday. “It is also fatal that the two main opponents, President Salva Kiir and his former Vice President Riek Machar, are supposed to hold leadership positions once again. Since December 2013, their bloody power struggle has cost 50,000 lives, around two million inhabitants of South Sudan were displaced, and the country is in ruins. With them in leading positions, new conflicts will be inevitable. Moreover, the governments of neighboring Kenya, Uganda, and Egypt are not interested in sustainable peace. “Thus, it will be difficult to effectively contain violence and to create lasting peace.”

On Sunday, Salva Kiir, and Riek Machar signed a new peace agreement in the Sudanese capital Khartoum, in the presence of several African leaders. A previous peace agreement, signed in August 2015, had failed. According to the new agreement, Riek Machar will again become one of the country’s five Vice Presidents.

Delius accused the South Sudanese leadership of cynicism, emphasizing how irresponsible and ignorant it is to simply install the same power-hungry and dreaded leadership – despite the suffering of the people of South Sudan. Both parties to the conflict are guilty of crimes against humanity and war crimes.

The STP fears that the new peace plan will make it even more difficult to punish human rights violations committed during the civil war – and it will hardly bring justice to the victims of the violence. “The government and the rebel groups will use the new peace plan to prevent an effective punishment of those who are responsible for the violence,” Delius warned. According to the 2015 peace agreement, the African Union (AU) was supposed to set up a mixed tribunal to deal with the crimes. This has not happened to this day. A few days ago, when the US Ambassador to South Sudan reminded the South Sudanese Minister of Justice of this, he laconically declared that according talks were underway.