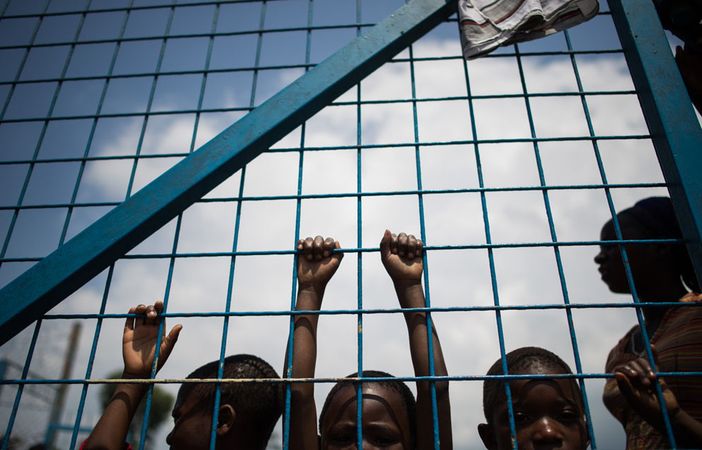 Dispelled Congolese children behind a fence. “Given the plight of 13 million people who are dependent on humanitarian aid in Congo, it is a scandal that the Congolese government decided to boycott an international aid conference. Foto: Urban Christian News via Flickr

The Society for Threatened Peoples (STP) has appealed to the UN Security Council to remind Congo’s government of its responsibility to take care of the people of the country – and, thus, to cooperate with aid organizations. “It is a crime against humanity to whitewash the humanitarian crisis and to starve the country’s people by keeping aid workers from bringing supplies to the needy,” the human rights organization stated in a letter to the Peruvian UN Ambassador Gustavo Meza-Cuadra, who took over the chairmanship of the Security Council in April.

“Given the plight of 13 million people who are dependent on humanitarian aid in Congo, it is a scandal that the Congolese government decided to boycott an international aid conference that will take place in Geneva today,” criticized Ulrich Delius, the STP’s director, in Göttingen on Friday. Congo’s government justified its absence by stating that the reports from international aid organizations were to be seen as exaggerated.

Referring to Congo’s strange behavior, the STP accused the government of the Democratic Republic of base motives. “Congo’s President Joseph Kabila does not care about the fate of his own people. His only concern is to stay in power by falsely giving the impression that the situation in the troubled country has stabilized,” Delius stated. However, there are still more than 4.5 million people on the run from violence, causing new humanitarian catastrophes. The situation in the provinces of South and North Kivu, Kasai, and Tanganyika is especially bad – similar to the situation in Yemen and Syria. Nevertheless, Congo’s authorities decided to reduce the alert level for humanitarian catastrophes in some of these regions.

Since 2015, the number of Congolese people suffering from malnutrition has risen by 71 percent, and the number of cholera cases has increased by more than 90 percent. “We are very concerned that Kabila’s allegations will lead to a dramatic decline in aid supplies and donations by international donors,” Delius emphasized. In 2017, the donations had only covered about 56 percent of the necessary funds to provide help for Congo. “The dramatic downturn means that aid agencies will have to cut down on their work – and those who are in need will not receive enough support.”