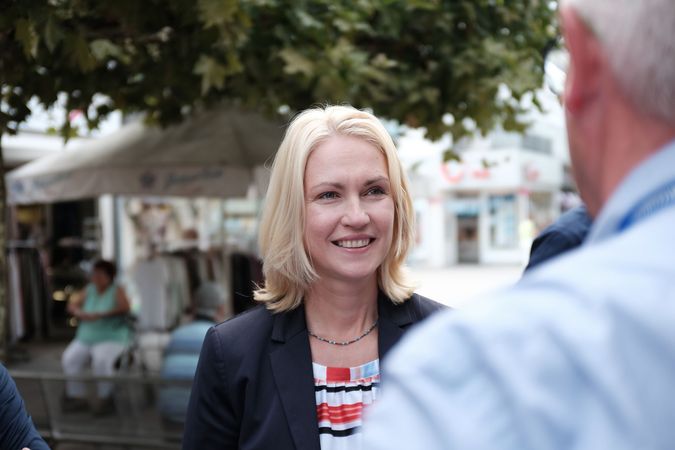 Both the Minister of Economic Affairs of Mecklenburg-Western Pomerania, Harry Glawe (CDU), and Prime Minister Manuela Schwesig (SPD) had recently urged the Federal Security Council to approve of the deal. Photo: SPD Saar via Flickr

On Tuesday, the Society for Threatened Peoples (STP) sent an appeal to the German Federal Security Council, asking not to issue a special permit in connection with the controversial plans to export patrol boats from Mecklenburg-Western Pomerania to Saudi Arabia. “There are no credible guarantees that Saudi Arabia will use the ships for coastal protection purposes only – and not to block ports in embattled Yemen. Also, the Peene shipyard should be aware that recipient countries don’t always take guarantees like this seriously,” said Ulrich Delius, director of the STP, in Göttingen. The shipyard had once before sold ships that were later used for a naval blockade – although this had been ruled out in a contract.” In the 1990s, ships of the National People’s Army of the German Democratic Republic (NVA) had been delivered to Indonesia, where they were later used for war purposes, against a contractual agreement.

Both the Minister of Economic Affairs of Mecklenburg-Western Pomerania, Harry Glawe (CDU), and Prime Minister Manuela Schwesig (SPD) had recently urged the Federal Security Council to approve of the deal – in order to secure jobs at the shipyard in Wolgast, and because the boats were not be seen as warships. On January 19, 2018, the federal government had stopped all arms exports to states that are involved in the war in Yemen, until further notice. According to the exploratory negotiations between the SPD and the CDU to form a new federal government, this also affects the 33 patrol boats for Saudi Arabia.

“The case is a fatal reminder of the scandal of 1993, when, despite our warnings, the federal government decided that it was safe to sell NVA ships to Indonesia on the basis of an end-use agreement,” Delius stated. “According to the agreement, the ships were to be used to fight pirates and to protect the coast. However, they were later used to suppress an uprising in East Timor, West Papua, Aceh, and the Moluccas in the years 1998 to 2003. Back then, the STP had repeatedly informed the German Ministry of Defense and the Ministry of Commerce about the illegal use of the boats, but Indonesia’s misconduct did not lead to negative consequences, not even regarding further arms exports. In 2013, for example, the country was able to obtain several German “Leopard” tanks.

“Also, there are no effective measures to check whether the respective countries comply with the contractual clauses,” Delius warned. Moreover, there are no appropriate sanction mechanisms for cases in which the countries break such contracts.