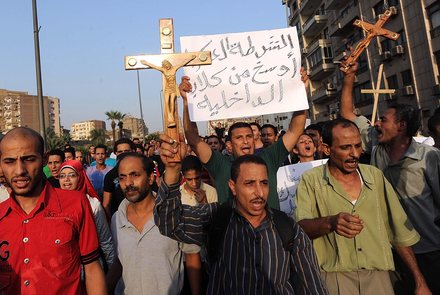 The heated parliamentary debate, during which the ultraconservative Salafist Nour Party protested vehemently against the new law, offered a foretaste of the impending problems. Photo: Tribes of the World/ Flickr

Following the Egyptian parliament’s adoption of a controversial law concerning the construction of new churches, the Society for Threatened Peoples (STP) criticizes that the parliamentarians and the government failed to take the objections of the Christian communities seriously. “It is, of course, a good thing that Egypt – after decades of confrontation – is finally trying to liberalize and facilitate the construction of new churches. Unfortunately, there are again limiting provisions to keep the Christian minority from exercising their religious freedom in the predominantly Muslim country,” said Ulrich Delius, the STP’s Africa-consultant, in Göttingen on Wednesday. On Tuesday, the parliament of Egypt adopted the long-awaited law by a two-thirds majority, following a heated four-hour debate.

One important point of criticism – which was also brought forward by Coptic members of parliament – is about the second of the 13 articles of the act, according to which the size of a new church must match the proportion of the Christian population in the respective district or village. “For the radical Islamists, this provision offers another opportunity to file complaints or to raise public pressure in order to delay or prevent the construction of new churches,” warned Delius. As there are no official registers in Egyptian towns, there is no verifiable or universally recognized data concerning the population structure. Nadia Henry, a Coptic member of parliament, described the law as a “political farce”, imposed on the Christian population by President Abdel Fattah Al-Sisi.

The heated parliamentary debate, during which the ultraconservative Salafist Nour Party protested vehemently against the new law, offered a foretaste of the impending problems. “In the future, the Salafists will still be able to instrumentalize the mob on the streets for their purposes, to impede the necessary construction of additional churches,” said Delius. “An unambiguous legal framework could help to put an end to the incitement.” Because approval processes are often arbitrarily dismissed or prolonged for years, many parishes are forced to hold services in dilapidated buildings or outdoors. If they apply for building permits, the Salafists regularly organize or stir up public protests.