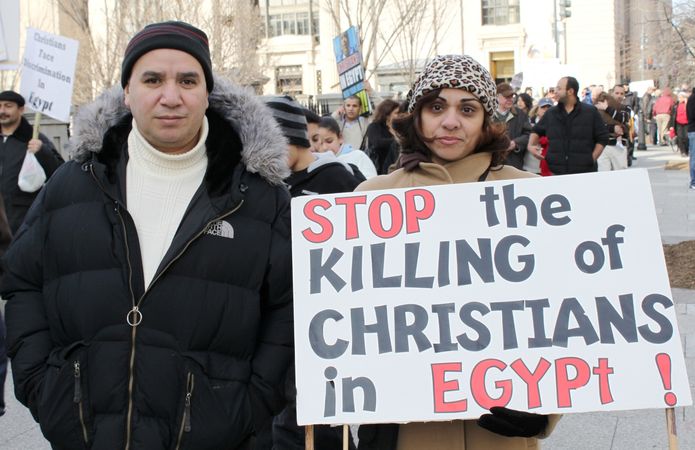 The everyday violence against Christians and their institutions, especially in Central and Upper Egypt, must be taken more seriously. Photo: Talk Radio News Service via Flickr

The Society for Threatened Peoples (STP) has sent an appeal to Egypt’s President Abdel Fatah al Sisi, asking him not to forget the Coptic victims of Islamist terrorist attacks. “The 28 Christian families who had fled to Port Said because of the killings in the north of the Sinai Peninsula three months ago have been living in a refugee camp since then, and they are waiting for help to this day,” criticized the human rights organization in a letter to the President. “If Egypt is serious about wanting to show solidarity with the Coptic Christians, those who survived the wave of terror must not be let down. They must be able to start a new life, integrated into Egyptian society,” said Ulrich Delius, the STP’s Africa expert, in Göttingen on Monday.

In the letter to Al Sisi, the STP, welcomed the progress made in the prosecution of the alleged perpetrators who had committed terrible attacks on three Coptic churches in December 2016 and a week before Easter 2017. On Sunday, the Egyptian Attorney General had referred the proceedings against the 48 suspected masterminds behind the attacks to a military court. “The fact that the suspects will be tried is an important step in the struggle against impunity for crimes against Copts in Egypt,” explained Delius. “We hope that the prosecutors will take the everyday violence against Christians and their institutions, especially in Central and Upper Egypt, more seriously. There must be criminal proceedings against those who are responsible, even if the attacks had hardly attracted any international attention.”

Currently, 31 of the 48 persons who are accused of being involved in the attacks are detained. A total number of 75 Copts had been killed in terrorist attacks on three churches in Cairo, Alexandria and Tanta – and the accused are also accused of being involved in the assassination of eight police officers at a checkpoint. They are said to have set up terrorist cells of Islamic State in Cairo and the province of Qena in the south of the country in order to carry out attacks on churches.

The Coptic Orthodox Pope Tawadros II is deeply concerned about the situation of the Christians in Egypt. Last week, during a visit to Ireland, he stated that the Egyptian Christians feel threatened in their existence.