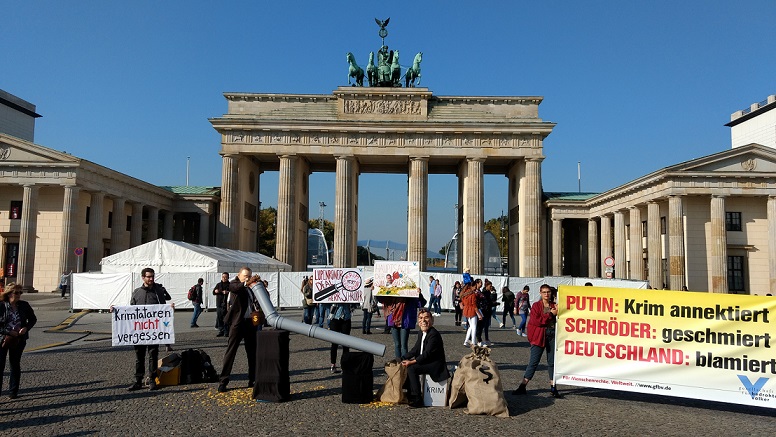 The Society for Threatened Peoples (STP) criticizes former Federal Chancellor Gerhard
Schröder’s election as member of the supervisory board of the Russian energy company Rosneft, which is close to the Kremlin, stating that Schröder will become Putin’s lackey. The STP initiated a human rights action in Berlin, under the motto “Putin: Krim annektiert / Schröder: angeschmiert /
Deutschland: blamiert”. At the rally, a man wearing a Putin-mask used a pipeline to send gold coin props to a Schroeder-impersonator, who stowed away the gold in sacks.

“We fear that Schröder will try to have the EU sanctions against Russia lifted. Rosneft is about to become a political lever the Kremlin can use to have the problematic sanctions against Russia lifted – and Schröder is supposed to play the role of the golden door opener in Europe. But as long as Russia continues its human rights violations in Crimea, Putin must not be rewarded for his policy,” stated Ulrich Delius, the STP’s director. The United Nations have accused Russia of serious human rights violations against the Crimean Tatars as well.

According to the human rights organization, Schröder’s justification that his new position is a private matter is to be seen as contradictory and implausible, as the ex-Chancellor instantly stated that his decision were to be seen as a highly political matter – an attempt to improve the relations with Russia. “A former Federal Chancellor must keep personal and public interests apart,” Delius explained.

Schröder was never known to be a human rights advocate. “In his new role as a member of the supervisory board, however, it is his job to monitor a company that – in our opinion – is destroying the livelihood of the indigenous peoples in the Russian Arctic and in Siberia,” explained Delius. The 260,000 members of the Nenets, the Khanty, the Mansi, the Saami, and other indigenous peoples who traditionally live as reindeer herders and fishermen are particularly vulnerable to the results of gas and oil production on their traditional land.

In June 2016, Rosneft founded the joint venture “Jermak Neftegaz” together with the energy British Petroleum (BP) in order to exploit new energy sources in the traditional settlement areas of the indigenous peoples of western Siberia. In search for new sources of energy, Rosneft’s subsidiary – with support from the Russian authorities – is currently taking possession of vast stretches of land that are traditionally used by Nenet reindeer farmers in the region of Krasnoyarsk. For the Nenets, the production of oil or natural gas is disastrous, as they will have to give up their pastures.