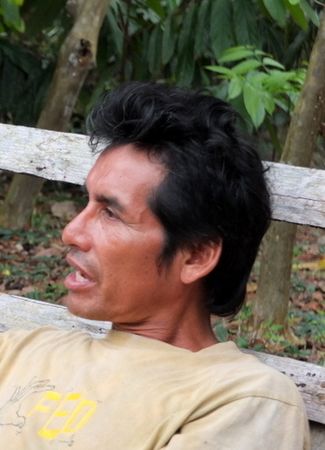 On Tuesday, the Society for Threatened Peoples (STP) in Göttingen received disturbing news from the Peruvian-Brazilian border: Edwin Chota, the charismatic leader of the Ashaninka community Saweto, and three members of his community were found murdered in the rainforest. The widows and children of the four victims were forced to flee to the nearby town of Pucallpa. The illegal loggers have encircled the Ashaninka who stayed in Saweto and are threatening the indigenous community.

To protect the Ashaninka from more violence, the STP immediately sent a letter to the Peruvian government and the UN High Commissioner for Human Rights (UNHCHR) Ra'ad Zeid Al-Hussein. The human rights organization stated: "The machinations of the timber mafia and the drug traffickers must be stopped immediately. The cowardly murders of the four Ashaninka must be solved and the perpetrators must be punished! This is the only way to prevent a further escalation of violence against the indigenous communities between Ucayali in Peru and Acre in Brazil. Please acct accordingly, now!"

Chota had worked towards a legal protection of the territory of the Ashaninka and the protection of the forests for years. Just recently, he had made important progress which could have made it difficult for the timber mafia to access the area.

Chota had been on his way to the Brazilian Ashaninka community Apiwtxa on foot, together with Jose Rios Pérez, Leoncio Quinticima Melendez and Francisco Pinedo. Following the two-day march, they wanted meet up to develop a joint strategy against the threat posed by illegal logging and drug trafficking in their area. "Chota was forced to seek protection on Brazilian territory before," said Yvonne Bangert, the STP's expert on questions concerning indigenous peoples. "His commitment has earned him powerful enemies. In 2012, he was threatened already. In April 2013, he stated in an interview for National Geographic: "They threaten us. They intimidate us. They have guns"."

The STP has been warning about the increasing violence of illegal loggers and drug traffickers against the Ashaninka in the border area for years.

Support the campaign of the Ashaninka to obtain land rights


Last year the group Friends of Saweto created an online petition to support the Peruvian Ashaninka in their demand to receive legal ownership of their land. Only then will Saweto be able to protect its territory from the illegal loggers in the region.

Support the Ashaninka in their fight against illegal logging and drug trafficking in their area! Sign the petition here!