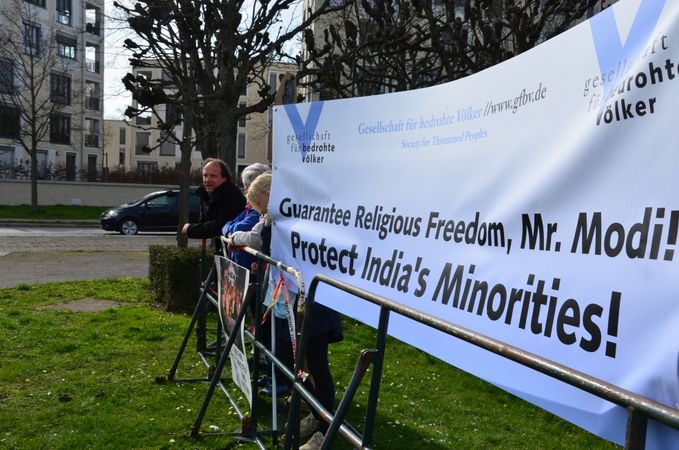 The Society for Threatened Peoples (STP) accuses India, this year's guest country of the Hannover Messe, of not granting the Christians and Muslims in the country their freedom of religion. "Since Prime Minister Narendra Modi took office in May 2014, attacks committed by Hindu nationalists against Christians and Muslims have increased by 55 percent," criticized Ulrich Delius, the STP's Asia-consultant. "Asia's largest democracy must take the protection of religious minorities seriously – or it will lose all its credibility concerning human rights issues. The Hindu nationalists are playing with fire. This could lead to an increase of violence and destabilize the entire sub-continent." The STP has asked Chancellor Angela Merkel to demand better protection for Christians and Muslims in India during her talks with the Indian Prime Minister.

More than 600 of such attacks were reported in India during Modi's previous term of office – 454 against Muslims and 152 against Christians. Hindu nationalists expressed threats against religious leaders and believers, there were interruptions of fairs and funerals, Christians were forced to renounce their faith and churches were vandalized. In March 2015, a 70-year-old nun who had tried to protect her younger sisters from radical Hindus was raped. Most of the attackers go unpunished, because the police tend not to go to much trouble in their investigations – and witnesses are often not willing to testify against Hindu nationalists for fear of reprisals.

About a quarter of the attacks are physical attacks against people. Clearly, there is an increase of violence against women. About half of the incidents are intimidations, threats and coercion. For example, a prayer group was forcibly broken up by Hindu extremists in Faridabad (Haryana) on March 8, 2015. A group of 700 furious Hindu had prevented the burial of a deceased Christians in a nearby village only two days before. About 25 percent of the registered attacks affect property, buildings or facilities of the two religious minorities.

"Non-Hindus feel more and more marginalized," said Delius. "They suffer from the climate of violence. Although the Christian churches in India can look back on a history of more than 1500 years, an apocalyptic mood is now spreading among the believers. Hindu nationalists are trying to install Hinduism as the state religion, denigrating other faiths as 'foreign' religions."