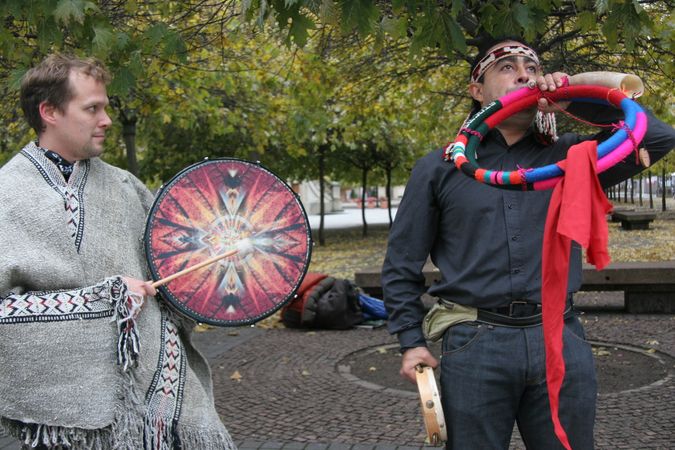 The Mapuche Alex Mora (right) at a STP action for the rights of indigenous Mapuche in Berlin 2010. Photo: Katja Wolff for STP

Today, the Mapuche Alex Mora will meet Pope Francis in Rome, and he will give him a letter from the Society for Threatened Peoples (STP) in which the human rights organization asks the Pontifex to advocate for the rights of the Mapuche. “Even after the end of the Pinochet dictatorship, the suffering of the Mapuche continues unabated,” the letter states. “Due to land grabs, many of them were forced to move to the cities – and there are ongoing conflicts concerning the expropriated Mapuche territories, which are now being used by forestry companies and other landowners. The authority that is responsible for returning the land, the Corporación Nacional de Desarrollo Indígena (CONADI) doesn’t have enough funds to buy back the land. The ongoing conflicts about land rights are leading to arrests and lawsuits against the Mapuche. The list of political prisoners is long.”

According to Yvonne Bangert, the STP’s expert on questions concerning indigenous peoples, it is especially alarming that the antiterror law (Ley 18.314) is being applied – a violation of the fundamental right to equal treatment in court. This law was adopted during the dictatorship and is now being used against the Mapuche. It allows, among other things, a very long period of investigative detention, without specific charges, as well as anonymous testimonies which cannot be verified by the defense. Lawyers who represented the Mapuche have reported about attempts to interfere with their work. Apart from that, many of the detainees complained that they are not allowed to practice their traditional religion in prison.

“The state often treats the Mapuche ruthlessly,” the STP criticizes. Following the death of the Luchsinger/McKay-couple, the Mapuche were accused immediately – without evidence or a claim of responsibility. The couple had kept a farm on former Mapuche territory. Among others, the two Machis (healers) Celestino Cordoba and Francisca Linconao were charged with arson leading to death. Cordoba was sentenced to 18 years in prison in 2014. Linconao was released in 2013, but was arrested and convicted – for the same incident – in 2016. There had been a principal witness, but he quickly retracted his statement, stating that it had been extorted by threats. The lawsuit against Machi Linconao is still ongoing.

Both Machis fell seriously ill in detention. Machis are only able to restore their spiritual balance if they are treated by other traditional healers with their own medicine, and they have to be able to access places of prayer places outside the prison. Unfortunately, they often don’t get permission. “Holy Father, we are asking you to ensure that all imprisoned Machis will be free to exercise their religion,” the STP urged.