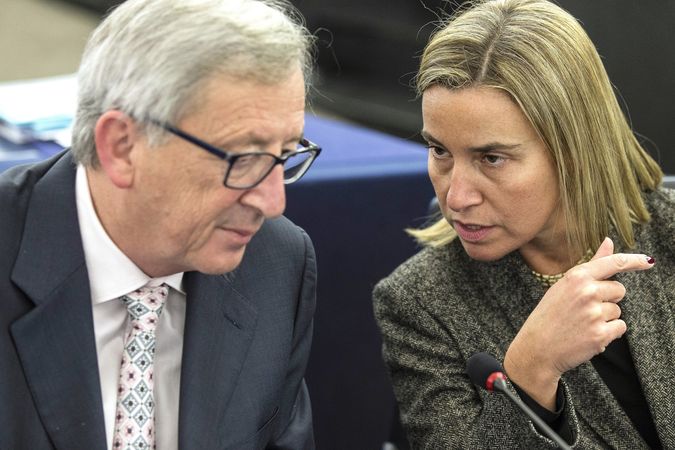 The Society for Threatened Peoples (STP) has sent an appeal to EU Foreign Minister Federica Mogherini, demanding that the catastrophic human rights situation in the People’s Republic should be on the agenda. Photo: European External Action Service via Flickr

On occasion of the first day of the EU-China summit on Tuesday in Beijing, the Society for Threatened Peoples (STP) has sent an appeal to EU Foreign Minister Federica Mogherini, demanding that the catastrophic human rights situation in the People’s Republic should be on the agenda, and calling for an end to the persecution of the Uyghurs, Tibetans, and human rights activists in the country. “Since the end of the Cultural Revolution, the human rights situation has never been as bad as today. Apparently, China is neither willing to implement promised reforms nor to promote the rule of law. If the EU is trying to ignore this in order not to upset China’s leadership, this will harm the EU itself as well as European companies that are doing business in the People’s Republic. The EU must offer criticism to remain credible,” said Ulrich Delius, the STP’s China expert, in Göttingen on Monday. Apart from China’s Premier Li Keqiang, the two-day summit will also be attended by the President of the European Commission, Jean-Claude Juncker, EU Foreign Minister Mogherini, as well as the President of the EU Council, Donald Tusk.

In the appeal, the STP recalls the massive wave of assaults and intimidation against lawyers who advocate for a rule of law, as well against members of minority groups. Chinese lawyers and civil rights advocates have experienced an unprecedented wave of repression ever since President Xi Jinping took power. Thus, there were 319 attacks against human rights defenders, lawyers, civil rights activists, and their family members; 264 people were temporarily detained, and 24 people were formally arrested. A total number of 39 civil rights advocates were kept from leaving the country. A new law was adopted, severely limiting the scope of action for nongovernmental organizations (NGOs) – so China’s civil society was virtually silenced. The new law also limits the scope of action for European foundations and NGOs.

In Tibet and in Xinjiang/East Turkestan, there has been a significant increase in human rights violations. Despite an official ban on torture, there are still cases of torture in China’s police stations. At the end of June 2016, the Tibetan Yudruk Nyima died in police custody in the district Dege only a few hours after his arrest. Chinese Police officers also tortured the Tibetan filmmaker Tsering Kyi following his arrest on June 25, 2016. Two days later, he had to be admitted to a hospital due to his severe injuries. In December 2015, the Uyghur Mehmet Ibrahim was tortured to death in detention in East Turkestan. Not even his closest friends were allowed to see his body before he was buried in secrecy.