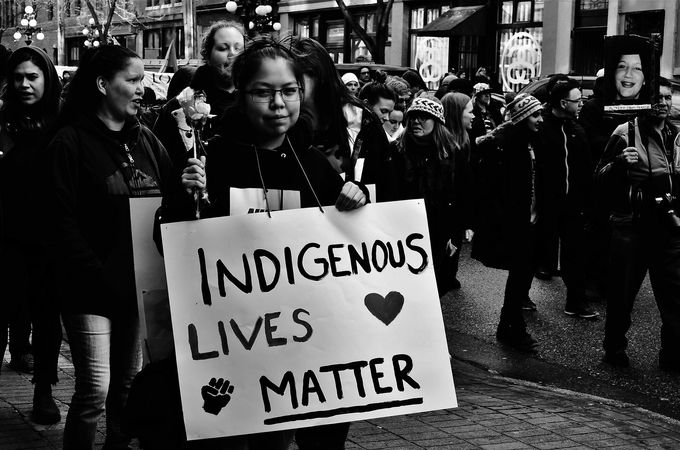 The Women's Memorial March in order to protect indigenous women in Vancouver. The STP demands better protection for indigenous human rights activists. An international convention for their safety has to be developped. Picture: kennymcdonald/Vancouver via Flickr CC BY-NC 2.0

On the occasion of the International Day of the World’s Indigenous Peoples (August 9), the Society for Threatened Peoples emphasizes that indigenous human rights activists all over the world are suffering from increasing violence – especially in South and Central America as well as in Asia. On Wednesday, the human rights organization published a 16-page memorandum, exemplarily focusing on the difficulties indigenous leaders and their communities are facing in Guatemala, Colombia, Paraguay, Burma, the Philippines, and Russia.

The memorandum states that indigenous peoples are often harassed by the state – especially the regular army – but also by non-state militias, prospectors, by oil or natural gas companies, mining companies, the drug mafia, or illegal loggers. Anyone who tries to defend the interests of his/her indigenous community is in danger. In Guatemala, for example, 496 peasant leaders were murdered in 2017 alone. Most of the victims were indigenous people who had peacefully campaigned for land rights or who dared to protest against large landowners or against major energy or mining projects on their traditional territory.

In Colombia, militia groups have been using the power vacuum following the 2016 peace agreement to bring indigenous land under their control – and there are also large landowners who are trying to get rid of the indigenous communities. The indigenous communities in Paraguay are threatened by the drug mafia and by illegal loggers. In Burma and the Philippines, it is often regular soldiers who harass and persecute indigenous human rights activists, who are often accused of supporting armed rebel groups. In the Russian Federation, indigenous human rights activists are systematically criminalized by the state authorities in order to silence them. The human rights of indigenous peoples are systematically ignored – especially in the resource-rich regions of Siberia.

Thus, the STP demands better protection for indigenous human rights activists. There should be more initiatives to actually put existing agreements into practice instead of treating them as abstract legal texts. The legally binding agreement to protect access rights in environmental matters (signed by 24 states in South America and the Caribbean in March 2018) has not yet brought any relief. Indigenous human rights activists are still threatened with assassinations, persecution, and criminalization. According to the STP, it would be necessary to adopt an international convention for the protection of indigenous human rights activists, taking their specific situations into account, to ensure that they are not helplessly exposed to the violence of criminal gangs, militias, or corrupt soldiers. As they belong to minority groups and mostly live in very remote regions, they are often exposed to especially severe pressure.

There are about 6,000 indigenous communities in the world, with a total of more than 450 million members. The international community has agreed that their fundamental traditional rights must be respected, but many governments are reluctant to give due consideration to these rights in the scope of their economic, social, and cultural policies.