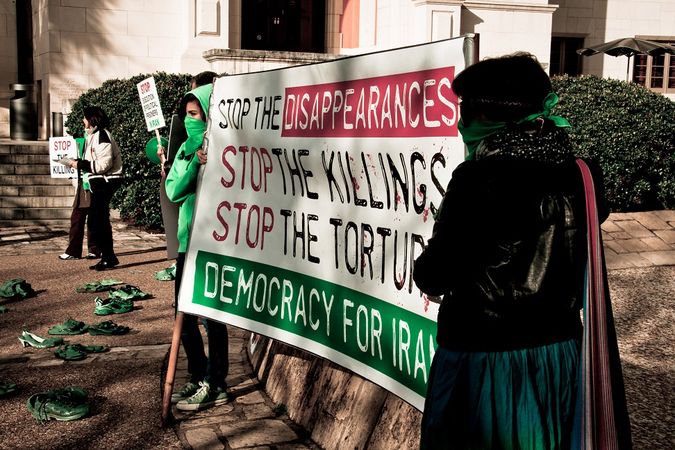 When the Shiite Mullahs took over power following the overthrow of the repressive Shah monarchy in 1979, this did not improve the human rights situation in Iran. Photo: Christopher Rose via flickr CC BY-NC 2.0

40 years after the beginning of the Islamic Revolution in Iran, the overall situation of members of the opposition and minority groups is still very challenging. On the occasion of the anniversary of the return of religious leader Ayatollah Khomeini from French exile, Kamal Sido, Middle East consultant of the Society for Threatened Peoples (STP), stated: "When the Shiite Mullahs took over power following the overthrow of the repressive Shah monarchy in 1979, this did not improve the human rights situation in Iran. On the contrary: the regime is putting more and more pressure on democratic opposition activists, women's activists, Kurds, Baha'is, Christian converts, and other minorities – with arbitrary detentions and draconian punishments."

According to Iranian human rights activists, at least 207 people have been executed in Iran in 2018, including five minors. More than 7,000 people are said to have been arbitrarily detained – including 1,400 members of ethnic and religious minorities, 467 trade unionists, 112 women's rights activists, 91 students, 50 media activists and journalists, and eleven lawyers. Most of the arrests took place in connection with the recent protests against the government.

Some of the arrests also took place in connection with raids, to be seen in the context of religious persecution. In 2018, at least 67 Christians were arrested, especially converts. Some of them were sentenced to long prison terms, others are still waiting for their lawsuit. In Iran, Christian converts cannot practice their faith publicly. They are forced to go underground, and there are more and more illegal "house churches". They are regularly raided and searched by the Iranian security forces, and present believers are arrested.

In the multi-ethnic state of Iran, the ethnic groups of the Aseri, Kurds, Arabs, Baluchis, Turkmen, Assyrians and other smaller ethnic minorities are still not recognized as independent peoples with their own language and culture. They are oppressed and discriminated. The same is true of anyone else who dares to reject state religion or the official worldview. "Members of the Baha'i religious communities, Sufi dervishes, Sunnis, and Christian converts are often arbitrarily accused of spying for foreign powers, then declared enemies of the state, leading to imprisonment," Sido reported. "Many of them suffer unspeakable conditions in Iranian prisons."