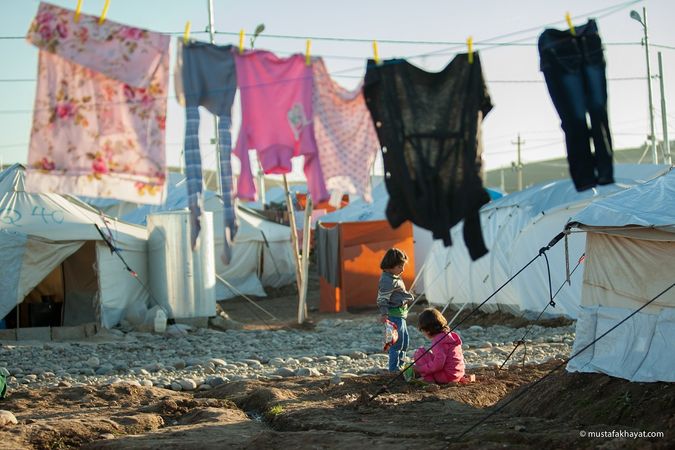 Syrian refugee camp in Erbil. At least two million refugees from Syria, as well as displaced Yezids and Christians from the Sinjar region in northern Iraq and from the Nineveh plain, have found refuge in Iraqi Kurdistan. Photo: Mustafa Khayat via Flickr

Following the advance of the Iraqi army and the Shiite militias into the multiethnic and multireligious city of Kirkuk, which is still being held by the Kurds, the Society for Threatened Peoples (STP) is calling for a diplomatic initiative by the German federal government and the governments of the EU member states in order to calm the situation in northern Iraq. “A further advance of the Iraqi army and the militias, which are supported by Iran, will destabilize the entire Kurdish region of Iraq – which had been relatively stable for years – thus causing an exodus,” warned Kamal Sido, the STP’s Middle East correspondent, in Göttingen on Tuesday. “At least two million refugees from Syria, as well as displaced Yezids and Christians from the Sinjar region in northern Iraq and from the Nineveh plain, have found refuge in Iraqi Kurdistan – and also in the province of Kirkuk, which is rich in oil resources. If they are forced to flee from bloody clashes once again, many of them will no longer see a future in Iraq and, thus, try to make their way to Europe.”

Among the refugees, there are, according to the STP, many Sunnis Arabs, whom the Shiite militias are generally accusing of having cooperated with the Sunni terrorist group Islamic State (IS). “Several tens of thousands of Sunni Arabs from Iraq have already applied for asylum in Germany. Many of them reported that members of their ethnic group were killed or tortured by Shiite militiamen in the predominantly Sunni-Arab provinces of Al Anbar, Tikrit, Diyala, or Mosul in the west and the north of Iraq,” Sido reported. The advance of the Shiite militias in Iraqi Kurdistan could cause fear among the Sunni Arabs living in Iraqi Kurdistan, as well as among the Kurds, Yazidis, and Christians, many of whom are traumatized since they had already experienced atrocities committed by IS in the summer of 2014.

The STP appealed to the governments of the EU member states to prevent a demise of the peaceful coexistence in Kirkuk. There have been many efforts to strengthen the relationship between all ethnic groups and religious communities in the region, including a large conference organized by the Kurdistan/Iraq-section of the STP in Kirkuk – under the patronage of Dr. Luis Sako, who was the Bishop of Kirkuk back then. Now, he is the Patriarch of Babylon and Head of the Chaldean Catholic Church in Iraq and the entire world. The conference was attended by about 150 people from all nationalities and religious communities – Kurds, Arabs, Turkmen, Assyrian-Aramaeans-Chaldeans, Yazidis, Shabaks, Mandaeans, Christians, and Moslems, as well as representatives of the Kurdish regional government and the Iraqi central government.