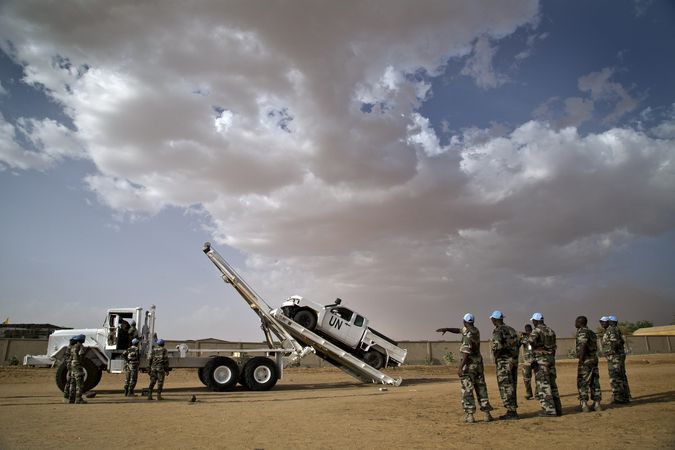 "The mission in Mali has become the most dangerous foreign assignment of the Bundeswehr. It is no longer appropriate to just rubber-stamp this decision," stated Ulrich Delius, the STP's director, in Göttingen on Wednesday. Photo: United Nations Photo via Flickr (CC BY-NC-ND 2.0)

The Society for Threatened Peoples (STP) calls for a credible public debate on the Bundeswehr's participation in the Mali-mission MINUSMA, which the Federal Cabinet will decide on today. Further, the STP demands clear objectives. "The mission in Mali has become the most dangerous foreign assignment of the Bundeswehr. It is no longer appropriate to just rubber-stamp this decision," stated Ulrich Delius, the STP's director, in Göttingen on Wednesday. "There will have to be clear guidelines to enforce human rights and lasting peace for the ethnic minorities."

This is especially true with regard to ensuring whether the Malian government is pursueing the same goals and interests as the UN. Because of the dramatic deterioration in the security situation in Mali, there are serious doubts about this. Thus, there has not only been an increase in violent attacks by Islamist extremists in the north of the country, but also an increase in violence in the long-neglected center of Mali. In addition to the Islamist attacks, the country is suffering from an escalating conflict between the hostile population groups of the Dogon and the Peulhs. Most recently, 160 inhabitants of a Peulh village got killed in a raid by a Dogon militia (March 23, 2019).

"Northern Mali is still far from stable," Delius emphasized. Tuareg representatives and human rights activists are accusing the government of delaying the implementation of the peace treaty of Algiers – apparently as an attempt to prevent more autonomy for the region and a strengthening of the Tuaregs. Like other nomadic groups in northern Mali, they have been demanding more self-determination since the 1990s – and according steps were actually agreed upon in the peace treaty of Algiers in 2015. "However, the Malian government seems to see the Tuareg people as its most important opponents, not the radical Islamists. This issue has to be clarified if MINUSMA is to be successful," Delius emphasized.

The United Nations Security Council must decide about a possible continuation of the mission by the end of June. France is pushing for a one-year extension of its mandate. The US, however, have expressed reservations, accusing Mali's government of jeopardizing the entire coalition against the growing influence of radical Islamists by failing to implement the Algiers peace treaty. From this point of view, Mali does not need a stabilization mission because there is no peace to stabilize – meaning that there would have to be a combat mission first, which would require a new mandate. "The German public has a right to know what kind of mission the federal government is about to agree to," Delius warned. "There has to be a credible public debate."