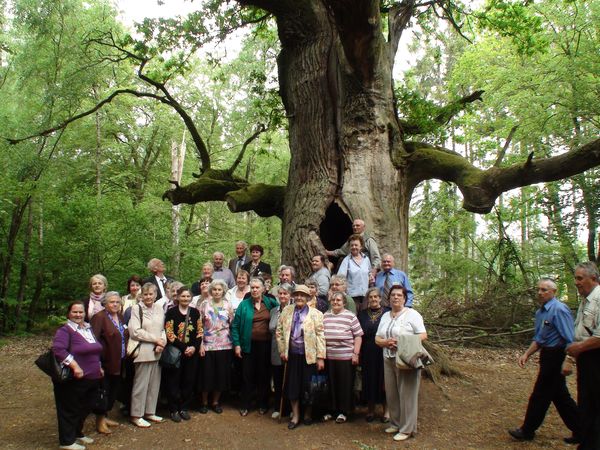 Visit of the “Wolf Children” in Germany in May 2011 Photo: STP archive

The Society for Threatened Peoples (STP) welcomes the fact that there is now a chance for symbolic reparations for the “Wolfskinder” from East Prussia. “This is long overdue,” stated the human rights organization in Göttingen on Tuesday. “The survivors of the hunger catastrophe in East Prussia from 1945 to 1947 have been fighting for ideological and political recognition of their fate for decades. Since they were born as German, they have so far not been eligible for any compensations. This was a very bitter experience for these people, who – in the post-war period – found themselves living in Soviet children’s homes, or who somehow managed to make their way from East Prussia to Lithuania, alone and often close to starvation, where many families were prepared to take them in if they were prepared to work.” When the Red Army conquered Königsberg (now Kaliningrad) in 1945, many lost their parents due to murder, rape, and abduction. More than 100,000 people lost their lives due to epidemics or starvation.

Hartmut Koschyk, the Federal Government‘s Commissioner for Matters Related to Immigration and National Minorities, informed the STP that the “Wolfskinder” will – following a recommendation of the “Advisory Committee on a Recognition Payment for Former German Forced Laborers” – be able to contact the Bundesverwaltungsamt (until the end of 2017) to apply for compensation. They have to be able to prove that they had to do forced labor. The STP had passed on a scientific statement from the historian Christopher Spatz to the advisory committee, proving that many of the “Wolfskinder” were forced to work. They had to work on sovkhozes, remove corpses, or – by order of the occupying forces – systematically collect all usable items from houses and apartments.

The STP has been promoting compensations for the “Wolfskinder” for years, calling on the administrative authorities to make full use of their scope of action. There are still about 55 “Wolfskinder” living in Lithuania, and the Lithuanian Honorary Consul in Baden-Württemberg, Wolfgang Freiherr von Stetten, has been advocating for them for quite a while. In Germany, there are still a few hundred – including the former inmates of children’s homes.

The STP has compiled a 86-page report about the “Wolfskinder”, documenting many of their fates as well as the political struggle regarding their requests for compensation. In April 2017, the human rights organization had appealed to the federal government to at least grant a symbolic reparation to those concerned. This appeal has so far been signed by: Tatiana Friesen (translator) and Walther Friesen (author), Ulla Lachauer (documentary filmmaker and author), Vytautas Landsbergis (first national leader of Lithuania after the country became independent in 1991), Wolf von Lojewski (TV journalist and news editor), Joachim Mähnert (Director of the East Prussian State Museum), Uwe Neumärker (Director of the Memorial to the Murdered Jews of Europe), Alexander von Plato (philosopher and historian), Romani Rose (Chairman of the Central Council of German Sinti and Roma), Wolfgang Freiherr von Stetten (Lithuanian Honorary Consul), Rainer Schulze (historian), Günter F. Toepfer (member of the Berlin House of Representatives), Martin Walser (writer), and Tilman Zülch (founder of the STP). The STP’s appeal is also supported by the former Federal President Christian Wulff.

We would be pleased to organize interviews with some of the “Wolfskinder” or to send you our report.