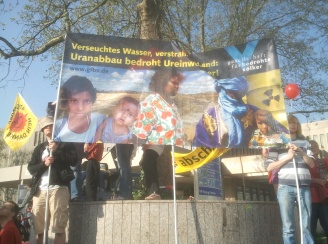 On Wednesday, in a demonstration in front of the RWE General Assembly in Essen the Society for Threatened Peoples (STP) has made accusations against the energy provider: "Natives are suffering for ‘our’ atomic energy!”, criticized the human rights organization with signs as it demanded protection measures according to German standards for miners and residents near the uranium mines or open cast mining. More than 70 percent of the worldwide uranium deposits are located in indigenous populated regions like those of the Aborigines in Australia, the Tuareg in Nigeria, the Lubicon Lake Indian Nation in Canada or the Adivasi in India.

"RWE must not only make public where they are obtaining the uranium for German Atomic energy plants from, but ultimately take responsibility for the people that have risked their health and that of their children for our atomic energy production”, demanded the STP. Until now the energy companies have veiled the origins of their uranium and have only published a list of their supplier countries but those countries are only middlemen”. According to the statistics office of the European Union, Eurostat, Germany imported around 4,552 tons of natural uranium in 2009. It is presumed that it comes from Australia, Nigeria, Canada, and Kazakhstan among others. Supplier countries are most notably, France and England. However, no uranium is extracted there.

According to information of the STP, the land of the Tuareg in Nigeria has become contaminated through the extraction of uranium. The ranges of radioactivity in some of their settlements have surpassed the permitted limits by a factor of one hundred. The ground water is radioactively contaminated. The Mirrar Aborigines in Australia are threatened from the planned expansion of uranium mining. The U.S. Lakota Indians have a shockingly high cancer rate. In parts of their traditional regions the water is poisoned because countless of small uranium mines and boreholes have been left open and unsecured. In India, the Adivasi work with uranium barrels and break ore containing rocks in the mines without protection clothes. Highly poisonous dust and mining waste contaminate their fields and rivers. But also other populations are threatened by the mining of uranium like the Inuit in Canada, the Sami in Sweden, Tibetans, Uighurs and Mongolians in China, Papua in West Papua/Indonesia, and the indigenous population in Vietnam.

"The native populations are almost everywere defenselessly imperiled by the disastrous consequences of the extraction of uranium”, lamented the STP. Most of the populations do not know how harmful it is for them to work in a mine or to live near a mine dump. The mining companies often try to save money by not providing the most simple safety measures of rubber boots or gas masks while profitting from cheap work force. No responsibility is taken for the health or life of the workers. Therefore, in 2010 the STP organized a talk about safety regulations between an Adivasi spokesman and the German Federal Agency for Radiation Protection in Frankfurt.