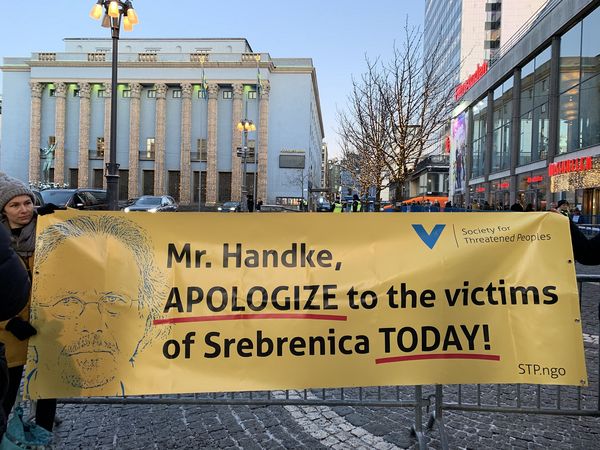 Protests against award ceremony for Peter Handke in front of the Konserthuset in Stockholm. Picture: Siems/STP

Today, the Society for Threatened Peoples (STP) protested against the award ceremony in which genocide denier Peter Handke was honored with the Nobel Prize for Literature. Together with many victims and representatives of various NGOs, the STP called on the writer to distance himself from the Serbian war criminals and to apologize to the survivors and families of the victims. "Clearly, Peter Handke has nothing but contempt for the victims of the genocide crimes – and he continues to support the perpetrators," stated Jasna Causevic, expert on genocide prevention and the Responsibility to Protect, on behalf of the STP. "The fact that the Nobel Committee accepts Handke's lies and decided to present him with an award will damage its credibility for years to come."

Since the 1990s, the Austrian writer repeatedly claimed that the war crimes and the crimes of genocide in Bosnia had never taken place. "Thus, he denied the experiences of the many thousands of victims and ignored the findings of international criminal courts. Above all, however, he is stirring up nationalist hatred and glorifying criminals," Causevic criticized. The Norwegian right-wing terrorist Anders Breivik and the right-wing extremist assassin of Christchurch (New Zealand) had stated to be inspired by Serbian ultra-nationalists, among other things.

"Handke should be legally prosecuted for his contribution to hatred and related crimes," Causevic demanded. According to an EU Framework Decision of 2008 (2008/913/JHA), all member states are obliged to criminalize "the denial, gross trivialisation and condoning of war crimes, genocide, crimes against humanity and war crimes" (Article 1, paragraph 1c). "This is exactly what Peter Handke has been doing for more than 20 years," Causevic recalled. "He deserves a criminal charge for that – not a Nobel Prize."