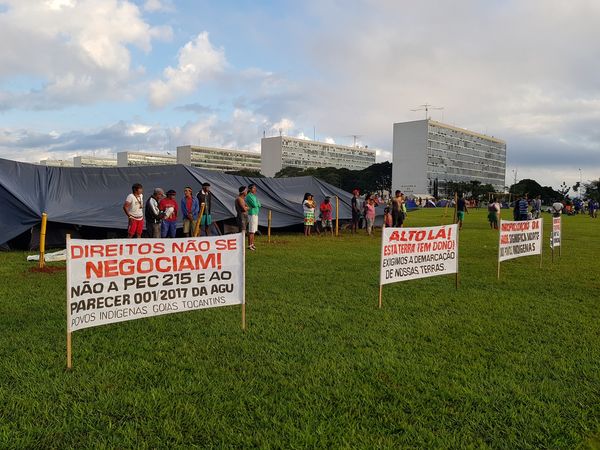 The Brazilian government has initiated another infrastructure project in the Amazon, and several indigenous communities see it as a targeted attack on their rights. In an article, project leader Maynard Marques de Santa Rosa suggested that such a project could be used to harm NGOs. He described how intelligence agencies could interrogate bureaus of indigenous and environmental organizations, discredit their media campaigns, control international NGOs, and stop subsidies to Brazilian NGOs altogether.

The Brazilian government has initiated another infrastructure project in the Amazon – officially aiming to further a sustainable development of the north-east of the country. However, several indigenous communities see the plans as a targeted attack on their rights. The project affects more than 8,700 people of 40 different indigenous peoples living in 208 small communities.

"The project is under the responsibility of Maynard Marques de Santa Rosa, who reports directly to the president," explained Regina Sonk, one of the experts on indigenous peoples of the Society for Threatened Peoples (STP). In an article from 2013, he suggested using such a project to harm NGOs. He described how intelligence agencies could interrogate bureaus of indigenous and environmental organizations, discredit their media campaigns, control international NGOs, and stop subsidies to Brazilian NGOs altogether. "These methods have massive implications for the affected indigenous communities," Sonk warned.

The Barão do Rio Branco project comprises four infrastructure projects, mainly located in northern Calhas in northeastern Brazil: a hydropower plant on the Trombetas River (Oriximiná), the extension of the BR 163 motorway to the Suriname border, a high bridge over the Amazon in Óbidos (PA), and the construction of so-called "development poles" in the region. Indigenous organizations strongly oppose the project: "We expressly oppose the genocidal policy of the Bolsonaro government," a joint statement reads – emphasizing that politics will not hesitate "to revive the Calha de Norte project of the military dictatorship, which has already destroyed several indigenous communities".

In 1985, the military dictatorship initiated the Calha de Norte project as a means to "strengthen the national presence" along the border with neighboring states, and the Ministry of Defense is now taking the same line for the current project. "The hair-raising statements made by the project manager clearly show that the Bolsonaro government will not shy away from methods of the military dictatorship, and the leading positions are occupied by very questionable personalities," explained Regina Sonk. "In Brazil, the pressure on civil society is increasing with targeted government action. Vulnerable populations, especially indigenous people, become targets. "

The STP called on Foreign Minister Heiko Maas to use the Foreign Ministers' Conference on South America and the Caribbean on May 28 to address Bolsonaro's questionable Amazon policy. "We are aware that the Minister has repeatedly stressed the importance of protecting the civil society," Sonk stated. "However, in order to effectively implement these efforts, the federal government must advocate for a strengthening of the civil society, condemn repressive and undemocratic actions, and demand Brazil's openly right-wing president to reorient its political agenda."