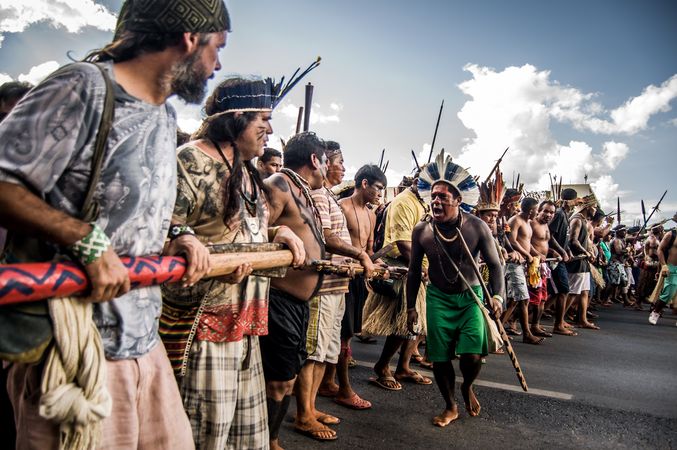 Several thousand indigenous people will take part in this year's "Acampamento Terra Livre" (ATL) to express their demands. The protest camp focusing on indigenous land rights will take place in front of the parliament building in Brasília from April 23 to 26. . It is supported by numerous national and international organizations, and Regina Sonk will represent the Society for Threatened Peoples (STP). Foto: Apib Communicação via Flickr (CC BY-SA 2.0)

This year's ATL is supported by numerous national and international organizations, and Regina Sonk will represent the STP. "In Brasília, we want to emphasize our solidarity with the indigenous organizations and movements of Brazil," she explained. "We expressly support the demands of the indigenous umbrella organization Articulação dos Povos Indígenas do Brasil to the Brazilian government. As an international human rights organization, we want to contribute to make their calls heard. "On April 24, alongside the ATL, vigils to support the indigenous protests will be held in front of Brazilian embassies in many capitals. Together with numerous supporters and other organizations, the STP will participate in the protests in Berlin.

The STP is increasingly concerned about the dwindling room for maneuver for indigenous human rights activists. The Bolsonaro government generally suspects local actors and organizations of cooperating with international NGOs, and many Brazilian organizations are under enormous pressure since the state has cut funding. "If, as in the case of Brazil, indigenous organizations come under pressure in their home country, they need strong international networks to openly articulate their interests without having to fear threats by the state," Regina Sonk explained. "From our point of view, the international community is obliged to provide platforms for the demands of Brazil's indigenous peoples." The STP thus calls on the German federal government not to stand by and watch the Bolsonaro administration trample on their fundamental rights and neglect its protection obligations. This policy would lead to massive human rights violations against the indigenous people. The German federal government must remind Brazil of its human rights obligations and its special responsibility because of the military dictatorship from 1964 to 1985.