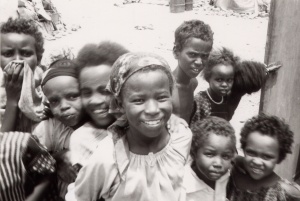 Development aid for Ethiopia should be reconsidered in light of continuing human rights abuses. This appeal came from the Society for Threatened Peoples (STP) on the eve of Federal Minister for Economic Cooperation and Development Dirk Niebel's visit to Ethiopia. The STP pointed out that the state-subsidized sale of land in Ethiopia to foreign companies threatens the survival of many ethnic minorities, and asked the minister to criticize the looming displacement of 225,000 indigenous people in his discussions with the Ethiopian government.

In the southwestern region of Gambella, three-quarters of the 300,000 inhabitants are slated for relocation to 49 new "villages" in 2011, within the scope of a state-run villagization program. "Especially hard-hit by the effects of this program are 60,000 Anuak and more than 100,000 Nuer," reported the head of the Africa section at the STP, Ulrich Delius. "This resettlement scheme is intended to make space for new rice, wheat and sugar cane plantations run by Indian and Saudi Arabian companies." Karaturi Global, an Indian firm, plans to cultivate over 740,000 acres of wheat in the region. More than 66,000 acres have been leased to BHO Agro and almost 62,000 acres to the Ruchi Group, both Indian companies. The Saudi Arabian firm Star has secured an area measuring 24,710 acres.

Officials emphasize that villagization will take place on a voluntary basis and will guarantee improvements such as schools and hospitals for the farming families. "But this is not a credible justification, because they are destroying villages that already have schools and hospitals," said Delius. Furthermore, the farmers are being pushed into resettlement. Criticism is clearly unwanted. An Anuak who criticized the resettlements on the "Voice of America" radio station in December 2010 is now being sought by authorities. At least ten farmers have already died in land conflicts in recent months.

Over the next five years, a portion of Ethiopia the size of Belgium will be leased to foreign agricultural companies. This will entail the relocation of some 750,000 people. The Bavarian company Acazis AG, too, according to its own information, has leased over 138,000 acres in eastern Ethiopia for cultivation of energy crops and has secured grants for another 494,210 acres.

"Niebel may call Africa a "continent of opportunity," but this does not apply to the farmers who live there," said Delius. "This large-scale land grab offers them only the "opportunity" of their demise. Ethiopia's government is ignoring traditional land rights to improve the balance of trade at their expense."