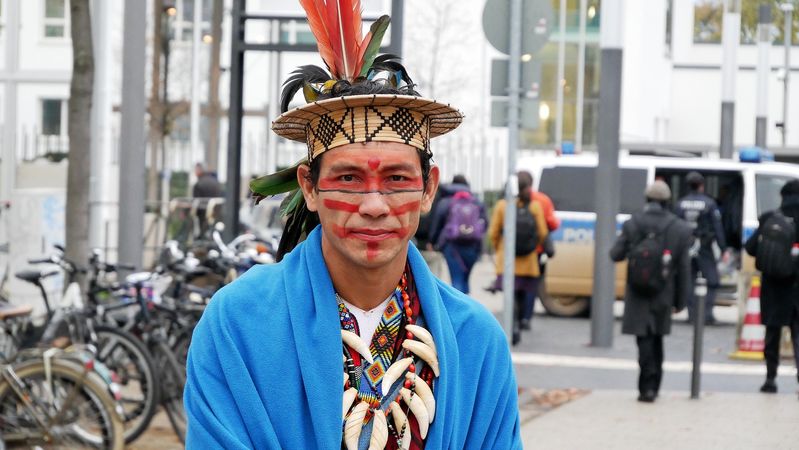 Several years ago, Benki Piyãko’s Ashaninka community established a rainforest initiative in the Brazilian state of Acre. They planted over 2,000 young trees in their territory. Photo: Hanno Schedler STP

The Society for Threatened Peoples (STP) sharply criticizes the course of the Climate Summit in Bonn so far. “The representatives of indigenous peoples – who came here from all parts of the world – have no chance to speak out. For days, they have been waiting to be accepted as equal negotiating partners in the discussions about possible measures to curb global warming. But they are not heard by the official representatives of the industrial nations,” said the STP’s expert on Brazil, Eliane Fernandes Ferreira, in Bonn on Friday. “Apart from that, the many representatives of the indigenous peoples were given a pavilion that is much too small. There is only room for 40 people. It is shameful to offend the indigenous peoples like this! They are the first victims of climate change. We have to take them seriously, because our irresponsible climate policy is a direct threat to their lives and to our lives.”

Eliane Fernandes Ferreira accompanied the Ashaninka spokesman Benki Piyãko from the Brazilian state of Acre to the climate conference in Bonn. They will be staying there until November 12. The STP announced plans to place a formal complaint against the exclusion of the indigenous people next Monday.

“With their hesitant measures against global warming, the industrialized nations are endangering not only the ecological, but also the cultural diversity of the earth,” explained Ulrich Delius, the STP’s director. “Climate change is already affecting many of the world’s approximately 5,000 indigenous peoples – with approximately 370 million people. It should go without saying that their needs and knowledge must be respected.” In order to continue their traditional way of life, indigenous communities are much more dependent on intact ecosystems than the developed countries.

Several years ago, Benki Piyãko’s Ashaninka community established a rainforest initiative in the Brazilian state of Acre. They planted over 2,000 young trees in their territory. At the same time, the Ashaninka have persistently tried to educate non-indigenous settlers in the region. Now, the settlers are aware of the fact that only an intact rainforest can secure their existence in the long term – and that this also has an influences on our existence. Benki Piyako and his Ashaninka community also founded the training center “Yorenka Ãtame”, which focuses on keeping the rainforest intact. The project aims to teach indigenous as well as non-indigenous young people how to make careful and respectful use of natural resources, even with modern means. They are trained in forestry, turtle keeping, beekeeping, and fish farming – and they also learn how to use computers and the Internet.