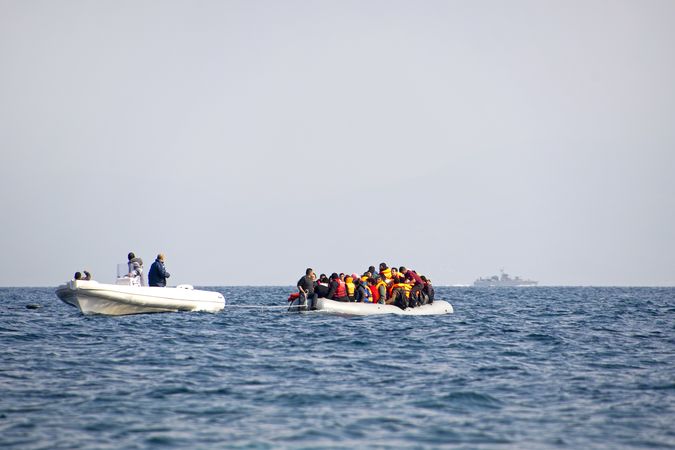 Refusing to help refugees who were saved at sea would have to be seen as a violation of the principle of non-refoulement according to Article 33 of the Geneva Convention on Refugees. Photo: AnjoKanFotografie via iStock

The Society for Threatened Peoples (STP) criticizes a suggestion from the CSU in the German Bundestag, according to which refugees who were rescued in the Mediterranean Sea should be brought to Africa instead of to Europe. The idea is to be seen as unrealistic and – in terms of international law – highly questionable. “Egypt and Libya, where most of the refugee boats take off, are unable or unwilling to protect the refugees. In both countries, there are severe human rights violations,” said Ulrich Delius, the STP’s Africa expert, in Göttingen on Thursday. Also, refusing to help refugees who were saved at sea would have to be seen as a violation of the principle of non-refoulement according to Article 33 of the Geneva Convention on Refugees. “Politicians who raise demands as the CSU is doing now should always check whether the suggestions can be implemented. Otherwise, statements like this are nothing but populistic electioneering bluster,” Delius said.

On Wednesday, Libya’s Ministry of the Interior had pointed out that the state, where a civil war has been going on for quite a while, is already unable to provide shelter for refugees. Most of the 77,000 refugees and migrants who are being held in camps in Libya are suffering from a catastrophic humanitarian situation, from torture and arbitrariness. Only 13,000 people, about a third of the total number of refugees, have found shelter in one of the 33 state camps – while warlords and armed militias are keeping the rest locked up under catastrophic conditions. “With regard to humanitarian considerations and to international law, it would be irresponsible and illegal to turn over refugees who were rescued from the Mediterranean Sea to militia groups or the overchallenged Libyan authorities,” said Delius.

In Egypt, where most of the refugee boats come from, the situation is not much better: especially the non-Arab refugees from other African countries are suffering from racism, attacks on refugees, and increasing human rights violations. For months, Oromo refugees who managed to escaped from massive persecution in Ethiopia, have desperately been trying to be recognized as political refugees by the local office of the United Nations High Commissioner for Refugees (UNHCR). In July 2016, two Oromo refugees had burned themselves as an act of protest.

According to the STP, it is absolutely unrealistic to expect Tunisia to provide shelter for rescued refugees. The impoverished state has enormous political and economic problems to deal with and would be overchallenged with taking up and looking after the boat people.