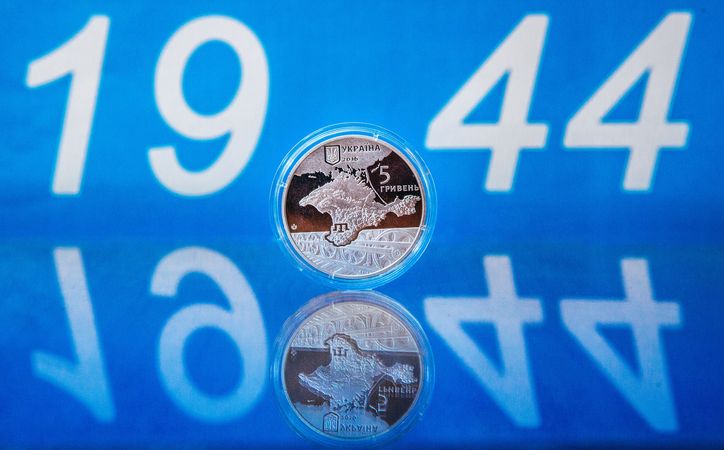 In memory of the deportation of the Crimean Tatars under Stalin 1944 the Ukraine government minted a commemorative coin. Photo: Julia Berezovska/ Press office National Bank Of Ukraine via Flickr licensed under Creative Commons BY-NC-ND 2.0

On occasion of the 72nd anniversary of the deportation of the Crimean Tatars under Stalin (May 18), the Society for Threatened Peoples (STP) and the Embassy of Ukraine are organizing a commemoration, which will also focus on the current human rights situation in Crimea. At the embassy, there will be a photo exhibition (starting at 6 pm) with portraits of survivors of the deportation, a screening of the film “A Struggle for Home: The Crimean Tatars” (director: Christina Paschyn), complemented by short talks, a panel discussion and a reception. At 8:30 pm, the STP will hold a vigil at the “Pariser Platz” in front of the Brandenburg Gate – with candles to resemble the outlines of Crimea. In this context, the STP introduces the following resolution:

The deportation of the Crimean Tatars on May 18, 1944, was an act of genocide!

Russia must keep a promise: Stop the persecution of the Crimean Tatars! The Federal Government and the EU must draw a clear line: Arbitrariness and violence against Crimean Tatars cannot be tolerated any longer!

The collective deportation of the Crimean Tatars took place on May 18, 1944. They had 15 minutes to get dressed and pack their personal belongings. All in all, 205,900 of the 238,500 deported Crimean Tatars were children and women. About 8,000 of them died during the deportation – and 46.2 percent of the deportees died during the first year in exile. The majority of the Crimean Tatars were forced to live in Uzbekistan, Kazakhstan and the Volga-Ural region in areas controlled by the army – in “special settlements” that they were not allowed to leave. They had no passports and were forced to work. In Crimea, there were attempts to wipe out all signs of Crimean Tatar life: cemeteries, mosques, houses, and farms were destroyed; theatres were used for different purposes, renamed or burned down – and even the names of places were replaced by Russian names. As of 1957, there was a comprehensive anti-Crimean Tatar policy throughout the former Soviet Union: publications in the Crimean Tatar language were banned, and information regarding the Crimean Tatars was deleted from encyclopedias. Russia, the successor state of the Soviet Union, never apologized to the Crimean Tatars for the crimes, which Ukraine officially recognized as genocide crimes on November 12, 2015.

In his speech to the Duma on March 18, 2014, the Russian President Vladimir Putin had promised the Crimean Tatars safety, freedom, and the observance of their rights. Immediately after the annexation, however, the indigenous inhabitants of Crimea once again became victims of arbitrariness and violence by the security forces, the judiciary, and the administration. The Crimean Tatar people now live in fear – due to murders, disappearances, unlawful detentions, hostage-taking, torture, house searches, the break-up of the Crimean media and the Mejlis – the democratic self-representation of the Crimean Tatars – and because of the violations of the freedom of assembly and the freedom of religion, as well as the isolation of the peninsula. They are merely trying to make use of their basic rights, which even the contemporary Russian legislation should guarantee.

Therefore, the Society for Threatened Peoples (STP), the Federal Union of European Nationalities (FUEN), the Youth of European Nationalities (YEN), Pravo, the Berlin Group for Human Rights in Ukraine, the Estonian Institute of Human Rights, the Institute for Caucasica-, Tatarica- and Turkestan studies, the Kharkiv Human Rights Protection Group (KHRPG), and Oliver Loode of the UN Permanent Forum for Indigenous Affairs have agreed on the following demands: