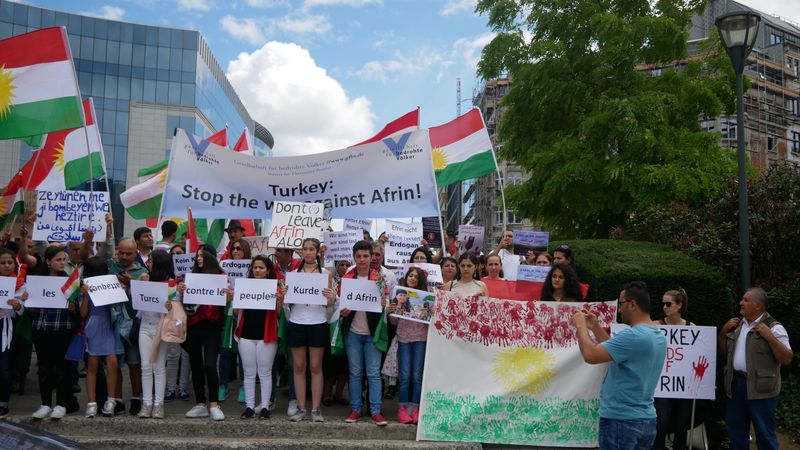 Afrin is not only a home to many minorities. Hundreds of thousands of refugees from other parts of the country have found shelter there too, especially from Aleppo. Photo: STP

On Monday, the Society for Threatened Peoples (STP) urged the Federal Government to disclose whether and how Germany provided financial support for Syrian opposition groups. The human rights organization fears that Germany provided funds – even for Islamist groups that glorify Turkey’s war of aggression (which is to be seen as a violation of international law) as well as armed Islamists militias who are attacking the Kurdish region of Afrin in northern Syria.

“For example, we know that the ‘National Coalition of Syrian Revolutionary and Opposition Forces’ is keeping up a liaison office in Berlin – and that representatives of this movement have been invited to events,” reported Kamal Sido, the STP’s Middle East Consultant, in Göttingen on Monday. “This national coalition is openly promoting the attacks against Afrin on its website. Further, the coalition praises the fact that there are Turkish-backed Islamist militias that are attacking peaceful regions in neighboring Syria. Germany must not co-finance such movements.” As long as the Kurdish people, the Yazidis, the Alawis, and the Christian people in the region are attacked, kidnapped, or taken hostage by pro-Turkish Islamists, there should be no diplomatic support.

According to the Syrian Observatory for Human Rights (SOHR), the armed opposition forces from Syria – which are supported by Turkey – are committing more and more atrocities in Afrin. A video that is currently circulating on social media platforms shows how pro-Turkish Syrian Islamists desecrate the body of a female Kurdish fighter. In the video, which was uploaded the Syrian Islamists, the body of the Kurdish woman is dragged through the streets behind a vehicle. SOHR has confirmed this incident.

Afrin is not only a home to many minorities. Hundreds of thousands of refugees from other parts of the country have found shelter there too, especially from Aleppo. The Turkish Air Force has already destroyed many Kurdish villages – and at least 127 civilians, including many children and women, have lost their lives.