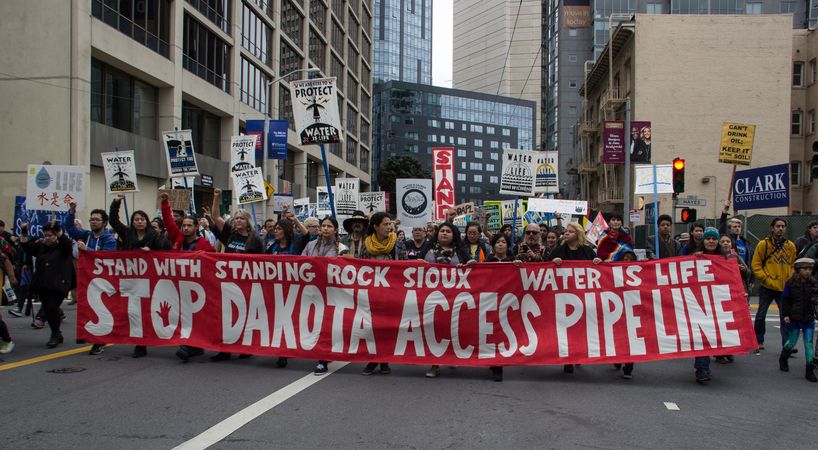 Several thousand supporters, members of Native Nations, as well as human rights activists, environmentalists and actors, have protested all over the world as an attempt to stop the project before the pipeline can be laid underneath the riverbed. Photo: Peg Hunter via flickr

On Thursday, the Society for Threatened Peoples (STP) urged the Deutsche Bank and the Bavarian State Bank “Bayern LB” to quit the controversial Dakota Access Pipeline (DAPL) in North Dakota, as the conflict is about to escalate. “The resistance of the Standing Rock Sioux – whose traditional territory is affected by the pipeline, although they didn’t agree to the project – has to be taken seriously,” says a letter the human rights organization sent to the two German financial institutions. “The Sioux are afraid that the pipeline will affect the most important source of drinking water in this dry region: the Missouri.”

In the meantime, several thousand supporters, members of Native Nations from all over America, as well as human rights activists, environmentalists and actors, have set up tent camps as an attempt to stop the project before the pipeline can be laid underneath the riverbed. The Deutsche Bank and Bayern LB belong to an international group of investors that is financing the pipeline project and the company Energy Transfer & Partners.

“The pipeline project is to be seen as violation of the UN Declaration of the Rights of Indigenous Peoples, signed by the US in 2010. The Standing Rock Sioux were not involved in the planning of the project”, said Yvonne Bangert, the STP’s expert on questions concerning indigenous peoples. “The right to freedom of religion has been violated as well: the construction work has already destroyed several holy sites and graves of the Sioux. Further, the pipeline might affect the right to clean drinking water (guaranteed by the UN), as leakages in pipelines are not uncommon. For this reason, the city fathers of Bismarck in North Dakota were able to have the original plans for the pipeline changed, stating that the citizens’ water supply was at risk. The Sioux who live farther south must have the same rights!”

“Anyone who aims to make money with investments in controversial projects like this – projects that are not legally secured at all – is partly responsible for the documented human rights violations against a peaceful protest movement that has been trying to make a stand for the right to clean drinking water,” the STP accused the German banks, demanding them to quit the project – following the example of the Norwegian banking company DNB.

The state of North Dakota and Energy Transfer are trying to push through with the pipeline project, which involves the use of tear gas, rubber bullets, water guns, as well as sharp dogs against unarmed civilians. Several hundred so-called “Water Protectors” have already been arrested, and the authorities have announced plans for a blockage of Camp Oceti Sakovin during the winter. The protesters living in the camps might also be facing indictments for breaching the peace.