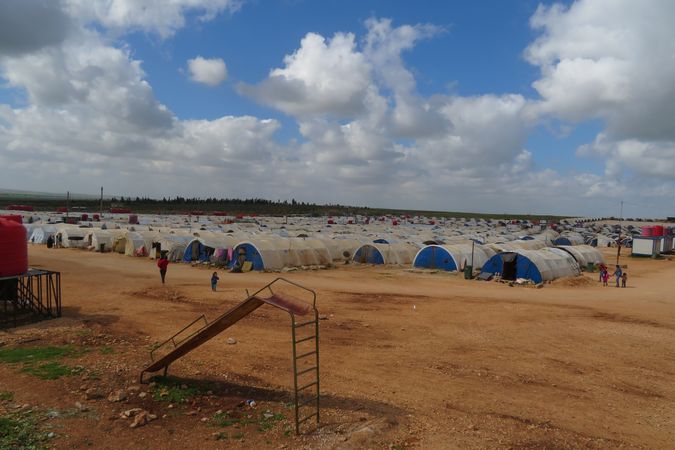 On the occasion of the second anniversary of his attack on Afrin – which is to be seen as a violation of international law – Turkish President Erdogan is planning to visit Berlin to talk about peace in Libya. Meanwhile, the formerly Kurdish-dominated north of Syria has been ethnically cleansed, according to reports by the Society for Threatened Peoples (STP). "The majority of the Kurdish population has fled or been displaced from the formerly multi-ethnic and multi-religious region," explained Dr. Kamal Sido, Middle East Consultant of the STP. Before the attack in 2018, there were about 1,000 Christians living in Afrin, but none of them are there anymore. Around 300,000 Sunni Kurds were forced to flee from Afrin as well – and have since been living in refugee camps in the north of Aleppo, often still in tents.

"Afrin's Sunni-Kurdish population was known for being especially tolerant," Sido recalls. "However, with Turkey's support, Syria's most radical Islamist militias are now in control." Today, a radical Islam is propagated in the mosques of Afrin, and the people are fed with hatred of democracy and other Western values. "There have been unprecedented measures to forcefully turn Afrin into a Turkish-dominated Islamic region, and the Kurdish cultural identity is being systematically destroyed," Sido criticized. "Germany and Europe are tacitly tolerating the ethnocide, as it is committed by a NATO partner".

Only two years ago, there were 20,000 to 30,000 Yazidis living in the region. Only about 1,300 of them are still living there now. Their cemeteries, sanctuaries, and associations were looted and destroyed. "The few remaining people of Alevi faith are suffering from the Islamization campaign. They are no longer allowed to show their religious affiliation or celebrate their rituals in public," Sido added. There are frequent kidnappings for ransom, and Kurdish women are often forced to marry radical Sunnis. Women without headscarves have completely disappeared from the region. 5,576 people have been arrested, the fate of about 2,350 of them is unknown. Many of them are probably not alive any more. 709 released Kurdish prisoners claim to have been tortured in detention. At least 68 people have died in detention over the past two years – presumably from torture and ill-treatment.

Meanwhile, the Turkish army and its Islamist allies are continuing their crimes. Since the renewed invasion ("Source of Peace") on October 9, 2019, a total number of 1,776 civilians have lost their lives and 3,909 were injured. About 6,000 people are said to have been captured by the Turkish army or by Islamist mercenaries. According to the Syrian Observatory for Human Rights, there are many former members of the so-called "Islamic state" among the Islamist militias on Turkey's side. "The Turkish army is responsible for war crimes or crimes against humanity," Sido explained. "But as long as NATO is willing to cover Erdogan, it is unlikely that anyone will be prosecuted accordingly."