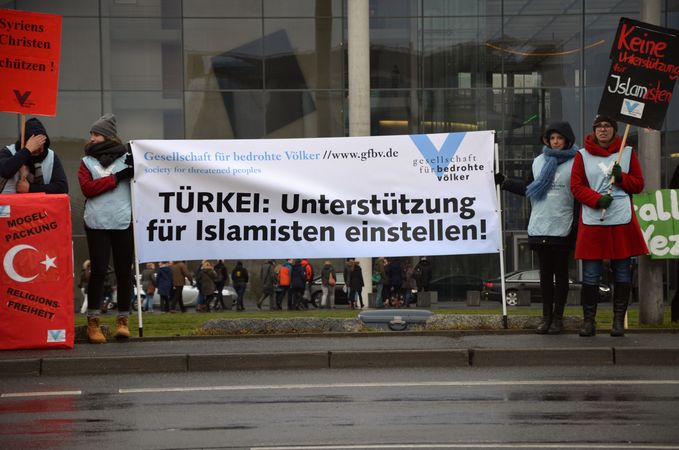 On Monday, the Society for Threatened Peoples (STP) sent an appeal to the German government, demanding that the NATO’s special session on Tuesday should not agree on a “carte blanche” for Turkey to lead war against the Kurds. “The Turkish Air Force and the artillery units are claiming to be fighting against ‘Islamic State’ (IS). De facto, however, they are helping the extremists by bombing their opponents. The attacks of the Turkish army against Kurdish positions in northern Iraq and in Syria have now revealed how deceitful the policy of the Turkish government is: Erdogan is moving in on those who protected members of the peoples of the Yezidis, the Christian Assyrians/Chaldeans/Arameans, the Armenians and other ethnic and religious minorities from jihadists from all over the world. This is an outrage!"

Zülch renewed the STP’s allegations against the Turkish authorities, emphasizing that the Turkish authorities had allowed radical Islamists to travel to Syria and Iraq through Turkey in order to massacre innocent people, to rape women and to expel whole population groups such as the Yezidis from the Sinjar region, the Christian Assyrians/Chaldeans/Arameans and the Shabak from the Nineveh plains or from Mosul in northern Iraq, as well as the predominantly Sunni-Kurdish people from Kobani in northern Syria.

Since Friday, the STP is receiving reports that the Turkish army is attacking positions of the Syrian Kurdish “People’s Protection Units” (YPG) to the west and to the east of Kobani. Several people have been injured. Apparently, Turkish fighter jets and artillery units also attacked civilian targets near the borders to Iraqi Kurdistan and Iran. There seem to have been attacks against several cities and villages – from Zakho in the west to the Qandil Mountains in the east: Mergasor, Khakurk, Piran, Keshan, Midzor, Kato, Swel, Kesta, Balok and Sidekan. There is no reliable information concerning the number of victims yet, as the attacks continue. Numerous fields belonging to Kurdish and Christian farmers have caught fire.