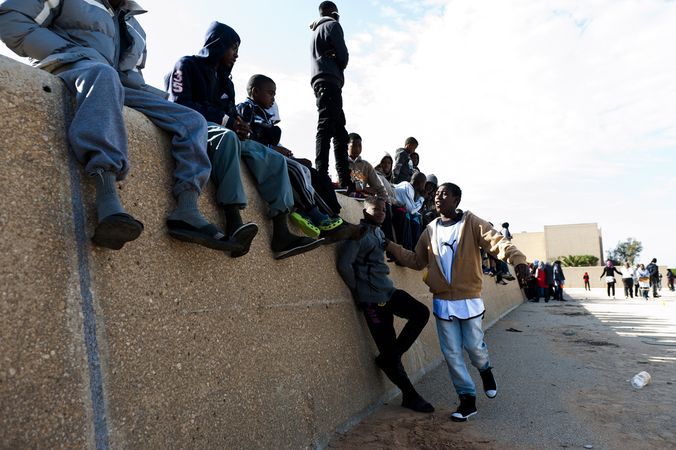 The dark-skinned Libyans had been forcibly displaced from Tawerha in 2011, following the overthrow of Muamar al-Gaddafi. Photo: European Commission DG ECHO via Flickr

On Monday, following the failure of the return of 48,000 dark-skinned Libyans to their hometown of Tawergha (which had been announced internationally), the Society for Threatened Peoples (STP) demanded that the displaced persons should be protected against racist attacks. On February 1, armed militiamen from the hostile neighboring town of Misrata had stopped the first 1,000 of the approximately 12,000 displaced families from Tawergha. Now, the returnees are living in tent camps in the desert – together with other prospective returnees – about 20 kilometers from the city. The dark-skinned Libyans had been forcibly displaced from Tawerha in 2011, following the overthrow of Muamar al-Gaddafi. They were accused of supporting the dictator, which is why, six and a half years ago, hundreds of them were abducted, tortured, and murdered by militiamen from neighboring Misrata.

On Monday (noon to 3 pm), refugees from Tawergha who are now living in Germany will hold a vigil in front of the office of the United Nations High Commissioner for Refugees (UNHCR) in Berlin, to demand a safe return of their compatriots.

“The Tawergha crisis shows that racism against dark-skinned people is still very common in Libya – so the road to reconciliation is long,” said Ulrich Delius, the STP’s director, in Göttingen on Monday. “There are reports about slavery in the refugee camps – and Libya’s reputation in Africa is ruined. This is why the Libyan rulers are so eager to spread news about a supposedly successful fight against racism, after they tried to sit out the Tawergha crisis for so many years.” After months of negotiations, the city council of Misrata had agreed to plans to let the displaced persons return. The government in Tripoli had also pledged its full support, provided security forces, and arranged for reconstruction work in the city.

Today, the militias demanded another apology for the allegedly committed “crimes” – and all persons who are said to have fought for Gaddafi are supposed to surrender. Last Sunday, militiamen had raided one of the three tent camps in the desert, spreading fear and terror with gunfire.